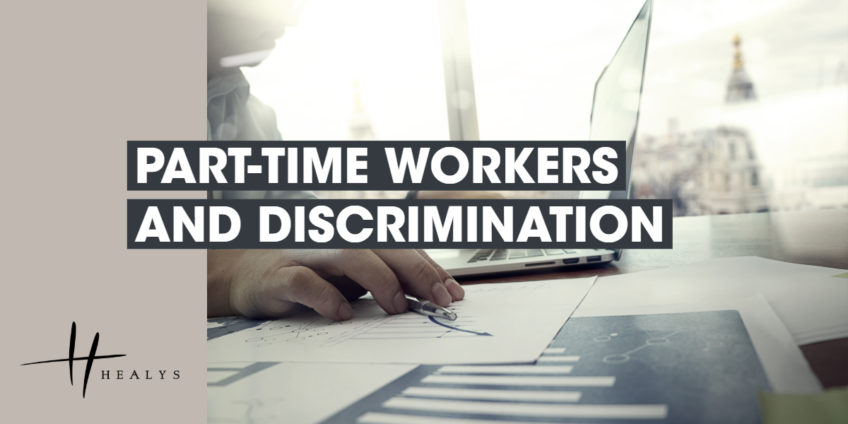 The Part-time Workers (Prevention of Less Favourable Treatment) Regulations 2000 established a minimum standard of fairness for part-timers so that they cannot be treated less favourably than comparable full-time co-workers, unless the treatment is justified on objective grounds.

In a test case on this issue (British Airways plc v Pinaud), the question was whether a part-time airline worker whose basic annual salary was 50 per cent of that of a full-time crew member but whose contract stated that she had to be available to work for more than half the number of days required of a full-time employee had been subjected to less favourable treatment on account of her part-time status.

Florence Pinaud worked for British Airways (BA) on a part-time contract. Full-time staff worked a pattern of six days on and three days off, meaning that they were available for work for 243 days a year and off for 122 days. Part-time staff worked a pattern of 14 days on and 14 days off. They were required to be available to work for ten days during the ’14 days on’ period, meaning that they had to be available for 130 days a year – more than half the available days required of a full-time worker. Because flights were allocated according to a system whereby staff could bid, according to personal preference, to work on longer flights, which might result in additional pay, or shorter flights, and staff were also required to carry out ground duties and undergo training, the actual hours worked could fluctuate and there was no clear link between days of availability and hours or even precise days worked. The annual basic salary did not vary with the number of duty hours, however.

Mrs Pinaud claimed that between 2005 and 2015 she had suffered less favourable treatment in two ways. Firstly, her contract of employment required her to be available to work for 53.5 per cent of the number of days that a full-time worker had to be available. Secondly, she argued that she was regularly required to work more duty hours than her full-time equivalent. BA denied that the part-time pattern constituted less favourable treatment, but if it did it was justified as there was a legitimate aim to provide a workable 50 per cent contract working pattern. Any differences compared with full-time workers were trivial, resulting as they did from the system of bidding for flights, and were a proportionate means of achieving a legitimate aim.

The Employment Tribunal (ET) found that the 8.5 additional days per annum that a part-time worker was required to be available for work constituted a significant period and did amount to less favourable treatment than the comparator as regards the terms of her contract. Whilst it agreed that there was a legitimate objective – i.e. to provide a flexible and predictable part-time shift pattern that worked for both BA and its staff – the less favourable treatment was not a necessary or appropriate means of achieving that objective. Additionally, the less favourable treatment could have been eliminated by adjusting the salaries of part-time workers in a different way – for example by paying them 53.5 per cent of the full-time salary. Having reached that conclusion, the ET did not go on to consider Mrs Pinaud’s second claim regarding actual hours worked or the statistics produced by BA in evidence.

On appeal, the Employment Appeal Tribunal (EAT) upheld the ET’s decision that the term in Mrs Pinaud’s contract regarding availability for work did offend against the Regulations. However, when it came to the question of justification the ET had been wrong to dismiss the statistical evidence presented as irrelevant. Having accepted that the unfavourable treatment complained of was in pursuit of a legitimate aim, the ET was bound to carry out a practical assessment of the impact of that treatment when deciding whether or not it was appropriate and necessary for achieving the stated aim. BA had argued that the effect of the unfavourable treatment was insignificant as in practical terms a part-time worker was not required to work more hours pro rata than their full-time equivalent, and this argument needed to be addressed.

BA appealed the EAT’s finding of less favourable treatment to the Court of Appeal and lost. Whilst there might be advantages to a part-time worker from the way the 14-14 contract was constituted, and these may or may not be found sufficient to establish a justification defence when the case is remitted to the ET, that does not affect the finding that the terms of Mrs Pinaud’s employment contract as regards availability to work were prima facie less favourable than those of her full-time comparator.

The case has now been remitted to the ET to consider the justification defence and, if that is rejected, the issue of remedies. The Court cautioned, however, that if the ET rejects BA’s defence of justification but accepts the statistical evidence put forward that the days per year actually worked by Mrs Pinaud were fewer pro rata than those worked by her comparator, ‘it would be a very surprising conclusion to go on to find that she has suffered “loss attributable to the infringement” amounting to 3.5 per cent of her total remuneration over the ten year period which is the subject of her claim’. More than six hundred of Mrs Pinaud’s colleagues have also presented claims against BA, which are stayed pending the outcome of her case.

Employers are advised to carry out periodic reviews of the contract terms of all categories of worker to ensure that these comply with the law. Contact us for advice on 0207 822 4000 or email employment@healys.com