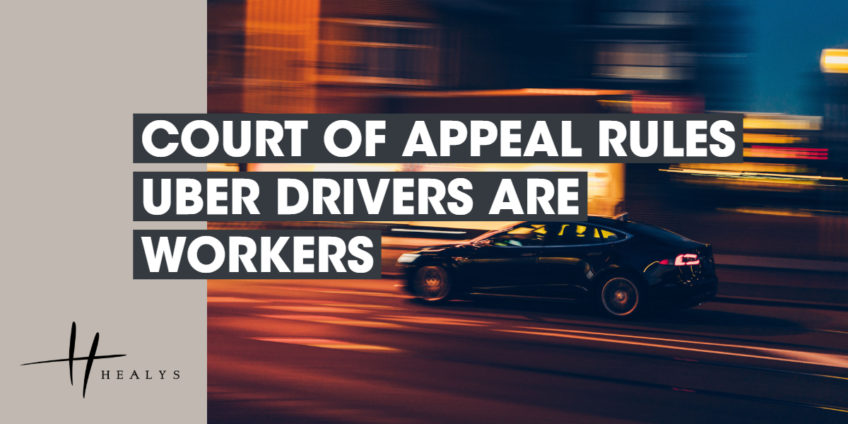 The Court of Appeal has upheld the decision of the Employment Appeal Tribunal (EAT) that drivers who use online taxi company Uber’s app are ‘workers’ within the meaning of the Employment Rights Act 1996 (ERA), rather than self-employed contractors, and thus have the right to be paid the National Minimum Wage or the National Living Wage and to receive holiday pay. However, the Court has given the company permission to appeal to the Supreme Court (Uber BV and Others v Aslam and Others).

Uber provides booking and payment services via the app. The documentation governing its relationship with drivers using the app states in no uncertain terms that Uber does not provide transport services and the drivers are independent contractors who contract directly with passengers. However, in 2016 a group of drivers brought Employment Tribunal (ET) claims challenging the assertion that they are self-employed. Their contention is that they are workers, as it is Uber that contracts with passengers to provide the driving services, and are therefore entitled to protections under the ERA, the Working Time Regulations 1998 and the National Minimum Wage Regulations 1999. Uber maintains that it merely provides a means for drivers to run their own businesses, emphasising that they are not obliged to use the app at any given time, nor do they have to accept any particular trip offered.

The ET found in favour of the drivers, a decision that was upheld by the EAT in 2017.

The Court of Appeal has now dismissed Uber’s challenge to the latter ruling. In a majority decision (Lord Justice Underhill dissenting), the Court found that the contractual terms do not reflect the reality of the drivers’ relationship with Uber. Drivers are under a positive obligation to work while they have the app switched on, and although they can accept or decline any given trip, Uber retains the ability to disconnect them from the app if they turn down fares too frequently.

Given the importance of the case, permission to appeal to the Supreme Court was granted.

This is a complex area of employment law, with employment status dependent on the individual facts in each case. The Government recently unveiled its ‘Good Work Plan’ (see https://bit.ly/2Q5tZVg), in response to the 2017 Taylor Review of Modern Working Practices, which it is hoped will lead to legislation clarifying the rights of those working in the ‘gig economy’.

We can advise you on employment status or other contractual issues, contact us on 0207 822 4000 or email employment@healys.com