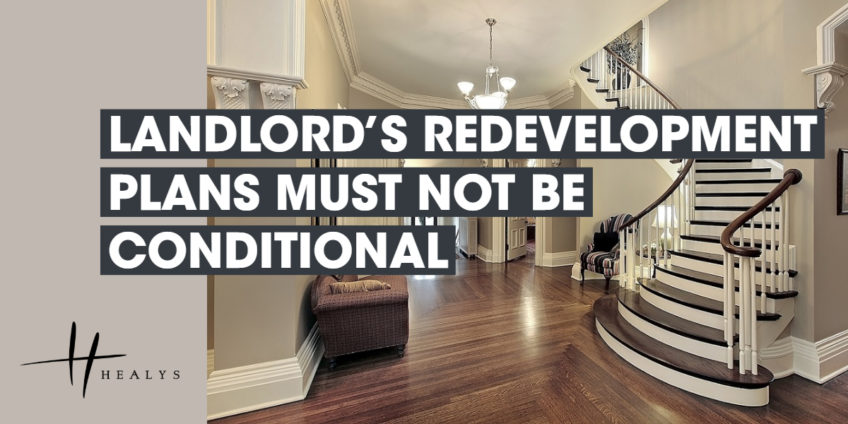 A recent case in which a landlord sought repossession of a property from its tenant on the ground that it intended to redevelop the property has gained a great deal of attention, but may not be as important as it first seems.

The facts of the case were that the landlord opposed the tenant’s application for a new commercial lease, claiming that it intended to carry out works to redevelop the property. What was unusual in the case in point was that the landlord’s intention was to carry out the works in order to obtain occupation of the property…the works in and of themselves were commercially not very attractive.

The tenant leased the ground floor and basement of the building, the rest of which was occupied and managed by the landlord as a hotel. The works specified to justify the opposition to granting a new tenancy were such that planning permission would not have to be obtained. The planned changes to the premises were minor: one of them was the demolition and rebuilding of an internal wall nearly identical to that being demolished.

The landlord conceded that if the tenant left voluntarily, none of the works specified would be carried out.

In the County Court it was accepted that, although the whole purpose of the scheme was to terminate the tenant’s lease, the fact that the landlord intended to carry out the work was sufficient reason for the application to succeed.

That decision was overturned by the Supreme Court (the appeal having leap-frogged the Court of Appeal). The Court concluded that the landlord’s intention to carry out the redevelopment must exist independently of the tenant’s wish to have a new tenancy. If the works would not be carried out if the tenant left voluntarily, the landlord’s intention was clearly conditional and could not provide grounds for a successful opposition to the tenancy.

The practical outcome is that where a landlord wishes to obtain possession of a property at the end of a relevant lease on the grounds that the property is to be redeveloped, there will need to be a properly considered and justifiable development scheme.