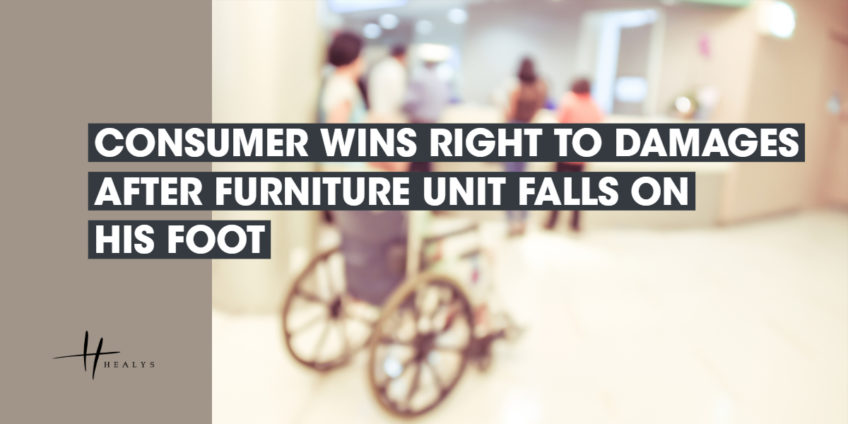 Consumers have a right to expect that the goods they purchase are of satisfactory quality and do not expose them to risk of injury, as was illustrated by a case in which a homeowner won the right to compensation after a furniture unit came apart and fell on his foot.

The man purchased the unit from a retailer at a reduced price as it was ex-display stock. Although it was designed to be split into two component parts before being moved, it was supplied to him as an assembled unit. He and friends succeeded in manoeuvring it into his living room, where it remained for over four years.

On subsequently moving house, the man was attempting to move the unit into the back of a van when its top section became detached and slid towards him. He fell over backwards and the section fell on him, causing damage to his right foot and ankle. He claimed that the accident had had grave consequences, including the loss of his job and the breakdown of his marriage.

In ruling on his damages claim, a judge found that there was no defect in the design or manufacture of the unit, nor was it intrinsically unsafe. However, in ruling that the retailer had breached the Consumer Protection Act 1987, he noted that the man had not been given an instruction manual and had not been warned that the unit should be disassembled into two parts before it was moved. In those circumstances, the product was not of satisfactory quality. The amount of the man’s compensation will be assessed at a further hearing unless settlement terms are agreed.

The Consumer Protection Act gives consumers certain rights when buying goods and services. As regards the safety of a product, purchasers are entitled to be given instructions regarding ‘doing or refraining from doing anything with or in relation to the product’ that could cause harm. If you have suffered an injury as a result of a faulty or unsafe product, you could be entitled to compensation. Contact us to discuss your claim on 0207 822 4000 or email injury@healys.com