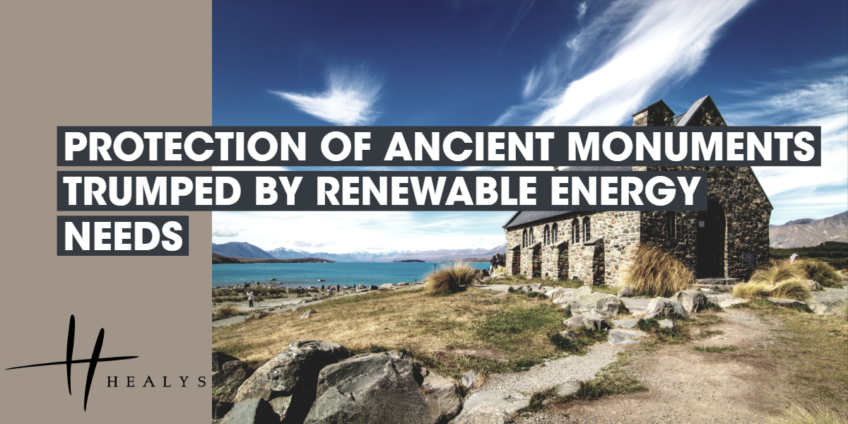 Developments that will harm the setting of scheduled ancient monuments (SAMs) will only be permitted in exceptional circumstances. However, the pressing need to increase the nation’s supply of renewable energy is such that a controversial wind farm proposal passed that exacting test.

A company’s plans to erect seven 110-metre-high turbines in a scenic part of Wales had excited much local opposition and planning consent was refused by the local authority. Following a lengthy public inquiry, a government planning inspector recommended that the company’s challenge to that decision be refused.

The inspector acknowledged that the proposal promised substantial benefits, in that the turbines would be capable of providing renewable energy to over 12,000 homes, thus reducing carbon dioxide levels in the atmosphere by almost 27,000 tonnes a year. However, he found that those benefits were outweighed by the harm the development would cause to the local landscape and the setting of four SAMs.

The Welsh Ministers subsequently disagreed with the inspector’s recommendation and granted planning permission for the project. They accepted that the turbines would have a significant impact on the setting of the SAMs, but nevertheless concluded that the renewable energy benefits justified the development.

In dismissing a challenge to that decision brought by a branch of the Campaign for the Protection of Rural Wales, the High Court noted that the Welsh Ministers had been entitled to differ from the inspector in the exercise of their own planning judgment. There was no dispute over the benefits the wind farm would bring and there was nothing irrational in the conclusion that there were exceptional circumstances which rendered the project acceptable.

The recent public protests about failure to tackle climate change have kept environmental matters in sharp focus and it remains to be seen if the balance is tilted even further in favour of renewable energy projects.

For more information about the services we provide, please contact us on 0207 822 4000 or email enquiries@healys.com