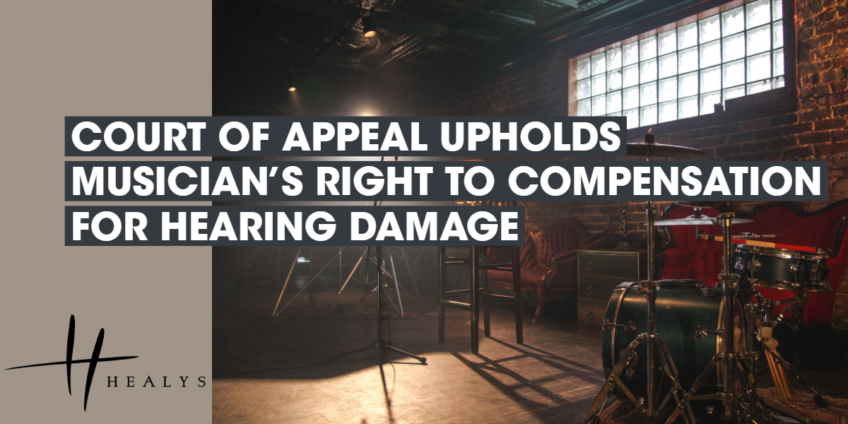 The Court of Appeal has rejected arguments put forward by the Royal Opera House (ROH) that a compensation award to a viola player who claimed that his hearing was damaged by exposure to the noise of brass instruments will curtail music making in the UK.

The viola player suffered hearing damage during a three-hour rehearsal of Wagner’s Ring Cycle. The conductor had rearranged the orchestra so that the musician was sitting immediately in front of 18 to 20 brass players, with the principal trumpet positioned close to his right ear. Although the ROH had provided earplugs, it left it up to individual musicians whether or not to use them. The musician had done so if he felt pain or discomfort or in anticipation of a particularly loud passage.

The musician claimed that he had been exposed to noise levels above the upper exposure action value and this had caused him to develop acoustic shock, a condition that can arise from exposure to unexpected loud sounds that is more normally associated with the sort of noises experienced by telemarketers or call-centre workers over their headphones.

He developed tinnitus and was subsequently diagnosed with high-frequency hearing loss. His hearing was so badly affected that he was forced to give up his musical career and he and his family had to move to the country to avoid noises that triggered or exacerbated his symptoms. He launched proceedings against the ROH alleging, amongst other things, breaches of the Control of Noise at Work Regulations 2005.

The ROH argued that the noise produced by a professional orchestra is the product, not the by-product, of its activities, and claimed that it had taken all reasonably practicable steps to protect the musician’s hearing.

In upholding the musician’s claim, the High Court found that no adequate risk assessment had been carried out and no attempt was made to monitor noise levels in the cramped orchestra pit following the new orchestral configuration. The Court heard evidence from another viola player who described the noise coming from the brass section during the rehearsal as unbearably loud. Even though she had worn personalised 25dB earplugs throughout, her hearing was also affected, leaving her more sensitive to noise for a number of weeks. The ROH had received previous complaints about excessive noise levels but had failed to instruct the musician to wear the earplugs provided for the duration of the rehearsal. His use of the hearing protection provided was therefore consistent with the advice given.

The Court of Appeal dismissed the ROH’s appeal against the High Court’s finding that it had failed in its duty to take steps to reduce noise levels in the orchestra pit to as low a level as was reasonably practicable. It was particularly noteworthy that the levels were significantly reduced after the musician went off sick and the pit was reconfigured, splitting up the brass instruments.

The ROH’s concerns that a ruling in the musician’s favour would result in its repertoire being confined to less noisy works and that musical activities in concert halls, theatres and schools would be curtailed were unfounded, based as they were on a mistaken understanding of the High Court’s decision. Whilst space was an issue for the ROH, most musical venues are large enough to overcome the problem. The evidence showed that a comparatively small repositioning of the orchestra had markedly reduced noise levels. In the Court of Appeal’s view, the national and international reputation of the ROH would not be affected by the decision.

The Court noted that there was no exemption under the Regulations for the music and entertainment sectors, although they had been given a two-year grace period, which expired in 2008.

The case has served to underline the obligation of orchestras to comply with the legislation. The amount of the musician’s compensation will be assessed at a further hearing.

Information on acoustic shock can be found on the website of the Health and Safety Executive at http://www.hse.gov.uk/noise/acoustic.htm.

There are strict standards that apply for permissible noise levels in all types of workplace. A worker who suffers damage to their hearing because their employer has failed to take the steps necessary to comply with the law in this regard may well be entitled to compensation.

For more information on the services we provide, please contact us on 0207 822 4000 or email injury@healys.com