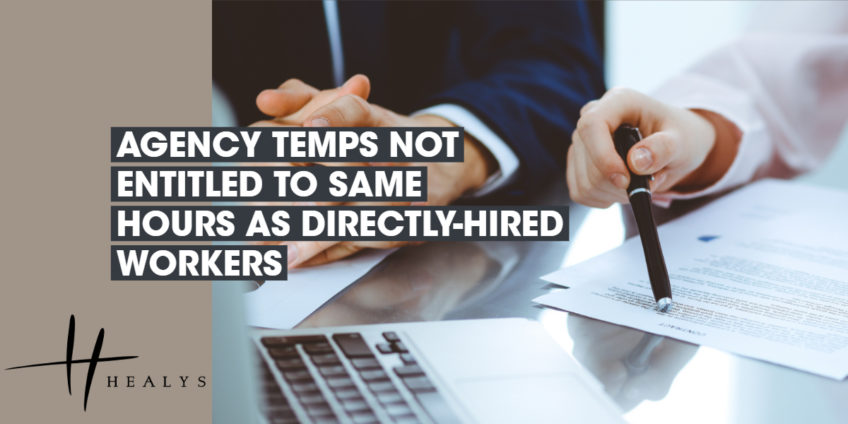 The Agency Workers Regulations 2010 (AWR), which implement the EU Directive on Temporary Agency Work into UK law, apply to those workers who are supplied by a temporary work agency to work temporarily for and under the supervision and direction of a hirer. Under the AWR, once a twpemporary agency worker has worked in the same job for the same hirer for a period of 12 calendar weeks, they are entitled to the same basic employment and working conditions as if they had been recruited directly by the employer. Basic employment and working conditions include:

Many businesses take on temporary agency workers in order to cater for peaks and troughs in their demand for labour. The flexibility such arrangements afford was acknowledged by the Court of Appeal when it rejected arguments that agency workers have a legal entitlement to work an equivalent number of contractual hours as directly employed staff (Kocur v Angard Staffing Solutions Limited and Another).

The case concerned a postal worker who was engaged to work at Royal Mail’s Leeds Mail Centre in January 2015 by Angard Staffing Solutions Limited, which is a wholly owned subsidiary of Royal Mail. He was typically allocated less than 20 hours of work per week, whereas full-time staff recruited directly worked 39 hours per week.

Later that year, he launched Employment Tribunal (ET) proceedings against the agency and Royal Mail, claiming, amongst other things, that Royal Mail’s failure to make work available to him on the same basis as to staff hired directly amounted to a breach of his right to equal treatment in respect of the ‘duration of working time’ under the AWR.

In rejecting that complaint, however, the ET did not consider that either the AWR or the Directive was intended to have such a far-reaching effect. Rather, the principle of equal treatment was meant to apply to temporary agency workers ‘for the duration of their assignment at a user undertaking’. It could, for example, involve not requiring them to work longer shifts than staff hired directly, but could not sensibly be construed as entitling them to the same hours of work. Royal Mail’s aim in engaging temporary workers is to supplement its own workforce as and when demand requires. As such, they will always be secondary to the hirer’s own workforce in terms of call upon their services. In rejecting the man’s challenge to that decision, the Employment Appeal Tribunal (EAT) found that his interpretation of the AWR would have absurd and unworkable results.

Dismissing his appeal against the latter decision, the Court found that the clear purpose of the underlying Directive is to ensure the equal treatment of agency workers and permanent employees while at work, and in respect of rights arising from their work. There is nothing in either the preamble or its actual provisions to suggest that it is intended to regulate the amount of work an agency worker is entitled to be given. To rule otherwise would be contrary to the whole purpose of using agency workers, which is to enable businesses to meet ups and downs in their need for labour and to offer flexible hours to agency workers – a purpose which the Directive expressly recognises and endorses.

For advice on any aspect of the AWR please contact Allison Grant on 0207 822 4000 or by email at: allison.grant@healys.com