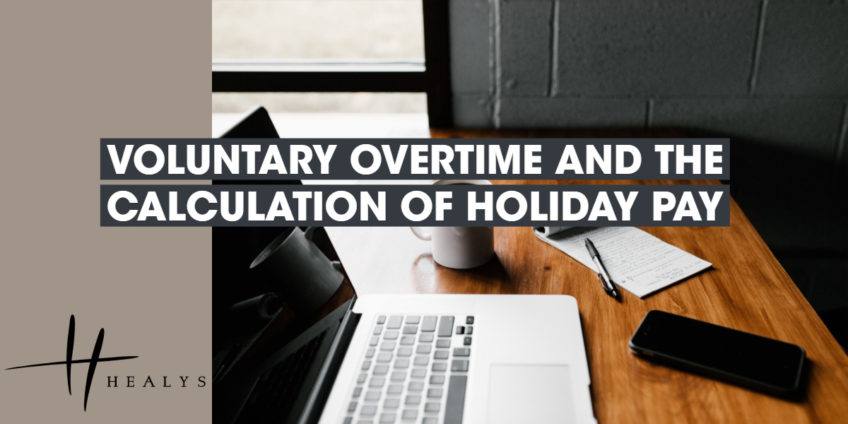 Should payments for voluntary overtime count as ‘normal remuneration’ for the purposes of calculating a worker’s statutory holiday pay entitlement for the four weeks’ annual leave required under the EU Working Time Directive (WTD)?

In 2017, the Employment Appeal Tribunal (EAT) ruled that where the pattern of work, though voluntary, extends for a sufficient period of time on a regular and/or recurring basis to justify the description ‘normal’, it is for the fact-finding tribunal to determine whether the work is sufficiently regular and settled for payments made in respect of it to amount to normal remuneration for the purposes of calculating holiday pay (Dudley Metropolitan Borough Council v Willetts and Others).

The question has now come before the Court of Appeal in a case that was heard by the Employment Tribunal (ET) before Dudley was decided (East of England Ambulance Service NHS Trust v Flowers and Others). The claimants were all employed by East of England Ambulance Service NHS Trust in a range of roles. They claimed that their holiday pay should include non-guaranteed overtime in the form of shift overrun payments, which arose when they were obliged to complete a task they had begun before the end of their shift which overran that time, and also payments for voluntary overtime shifts, which employees could choose to work if they wished. Their claims were brought pursuant to the terms of their employment contracts and, alternatively, under Article 7 of the WTD.

The ET held that the claimants’ contractual terms and conditions entitled them to have their non-guaranteed overtime taken into account in the calculation of their holiday pay, but not their voluntary overtime. As regards the statutory claim under the WTD, this was conceded by the Trust in respect of non-guaranteed overtime but the ET agreed with its argument that voluntary overtime was in a different category in respect of this claim also.

On appeal, the EAT upheld the claimants’ arguments in their entirety.

In dismissing the Trust’s appeal against that ruling, the Court of Appeal found that the EAT’s decision reflected a true interpretation of a collective agreement incorporated within the claimants’ employment contracts. Whilst this decision meant that the NHS workers had succeeded in their claim, the Court went on to consider the position under the WTD, as this has implications for employees and employers throughout the workforce and clarity on the issue is much needed. The finding of the Court was that the Trust’s obligation to take their workers’ voluntary overtime payments into account also arose under the WTD.

The Court noted that it has been repeatedly emphasised in European legislation and case law that paid annual leave is a fundamental right. The Court of Justice of the European Union has frequently stated that there must be no financial disadvantage that would dissuade workers from taking such leave and that employers cannot satisfy obligations imposed by the WTD by paying the bare minimum under workers’ contracts.

The exclusion of voluntary overtime from the calculation of holiday pay would also carry the risk of encouraging employers to reduce their holiday pay liabilities by setting artificially low levels of basic contractual hours and categorising any remaining working time as overtime. The prevalence of so-called zero hours contracts in the UK meant that such a risk was far from fanciful and provided a very real objection to the Trust’s arguments.

Annual leave must, in principle, be determined in such a way as to correspond with the normal remuneration received by a worker, including any voluntary overtime payments or other supplements.

If you have employees whose pay regularly includes overtime worked in addition to the normal working hours stated in their contracts of employment and would like advice on your individual circumstances, please contact Allison Grant on  0207 822 4000 or email employment@healys.com