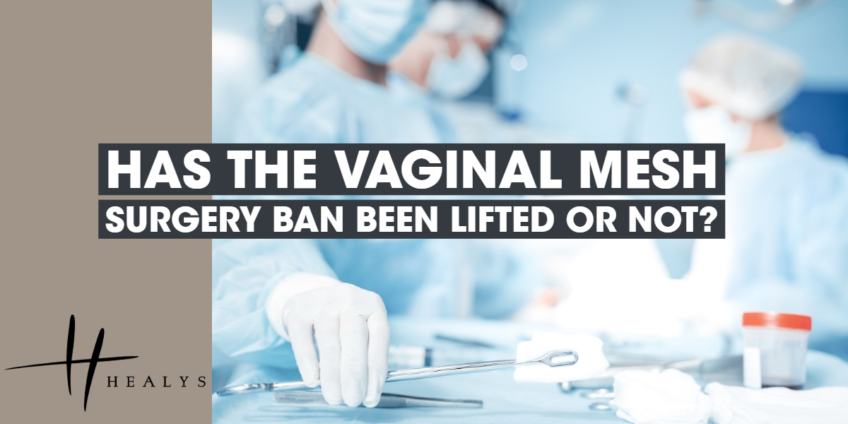 Earlier this year, we wrote about the fact that the government had  ordered that all further surgery involving vaginal mesh implants was to be halted, pending the outcome of a review into its use. Since 2008, transvaginal mesh has been used as a method of treating pelvic organ prolapse and incontinence after childbirth.

The enquiry into the many reported problems experienced by women who had undergone mesh surgery, was ordered by then Health Secretary Jeremy Hunt, in early 2018. Baroness Julia Cumberlege, was appointed head of the review team.

What is Vaginal Mesh Surgery?

Vaginal Mesh Surgery, also known as TVT mesh surgery is carried out to treat stress urinary incontinence (“SUI”) and to repair pelvic organ prolapse in women. The mesh is used as a permanent implant to support the urethra or bladder.

What are the problems that some TVT mesh patients have experienced?

Many women who have undergone mesh surgery, have experienced excruciating pain. The pain has been caused by the mesh used to repair the prolapse, cutting into the vagina. Not only has this caused immense pain for the patient but in numerous cases it has also impacted on their ability to have sexual intercourse and lead normal lives – some women have even been left unable to walk, as a result of the pain caused by the bungled surgery. It has caused some sufferers to stop work altogether.

Can the mesh be removed if it starts to cause problems?

Surgery to remove the mesh, when such problems occur, is of itself a surgical procedure that is fraught with difficulties. One of the problems is that the mesh becomes intertwined with the surrounding tissue. It is designed to be permanent. Removing it can cause damage to surrounding organs. The skills required to perform successful mesh removal surgery are not possessed by more than a small number of consultants.

Can those who have been affected make medical negligence claims?

In April 2017, BBC News website carried a report that revealed that 800 women were seeking the help of medical negligence solicitors to assist them in taking legal action to recover TVT mesh compensation from the NHS for medical negligence and from the manufacturers of the mesh tape, for faulty product liability. More than 2 years on from the report and the numbers pursuing compensation are likely to be many times that amount.

What is the up to date position on the surgery ban?

Baroness Cumberlege reported the early findings of her review back to the Government in July 2018. She indicated that there were six conditions that needed to be met before any resumption in mesh procedures should resume. The conditions were that:

NICE indicates that the ban on surgery can be lifted – or does it?

In April of this year NICE issued updated guidelines. To the surprise of many, these guidelines suggested that mesh surgery could again be offered under the NHS, if the Cumberlege Inquiry conditions outlined above, were met. Campaigners against the use of TVT mesh surgery such as MP Owen Smith and campaign group, ‘Ditch the Sling’ founder, Kath Sansom were outraged. Miss Sansom was quoted as saying that the new NICE guidelines “…are effectively no different than they were in 2003.”

Baroness Cumberlege was seemingly not impressed with the new NICE guidelines either. She was quoted as saying;

“Last July, we recommended, and NHS England and the Department of Health & Social Care agreed to, an immediate pause in the use of mesh for stress urinary incontinence.

We set five conditions that would need to be met before the pause could be lifted and the use of mesh could be contemplated. Those conditions have not yet been met, and it is clear to us that it will be some considerable time before they are. This means that now and for the foreseeable future mesh should not be used to treat stress urinary incontinence either in the NHS or the independent sector.”

The Cumberlege Inquiry continues. According to the official review website, the report is due to be published by the end of 2019.

Interestingly, in a news item on the enquiry website, dated 28th June 2019, under the heading:

Baroness Cumberlege made mention of the revised NICE guidelines. She made clear that after being contacted by her review team, NICE had confirmed that it was indeed the intention of the guidelines to maintain the ban on the use of transvaginal mesh for the treatment of vaginal prolapse , except for ‘research only’ purposes (the exception that originally applied when the ban, or pause, was first introduced). NICE confirmed to the Review that they accepted that they had not conveyed this clearly enough when publishing the new guidelines.

The ban remains, for the time being.

What will happen next?

With the clarification from NICE confirming that their advice is that the ban on mesh surgery should remain for the immediate future, all attention will now be on the long-awaited findings of Baroness Cumberlege review team. This is due by the end of the year. The review website gives an insight to the amount of work that Baroness Cumberlege has been undertaking up and down the country. Her regard for the women who have suffered from transvaginal mesh operations that have gone wrong, is evident. A side comment that she made when expressing her insistence that the ban on mesh surgery should not be lifted, this April, may also be telling, when she said:

“The scale and intensity of this tragedy is truly shocking – lives have been ruined.”

Campaigners against the use of TVT mesh, will be hoping that that may be an indication that the findings of the review, when published, will recommend a permanent ban on the use of mesh.

Healys’ medical negligence team has had considerable experience of helping the victims of surgical mesh procedures that have gone wrong make successful surgical mesh implant claims. Contact us in complete confidence and without obligation at enquiries@healys.com.