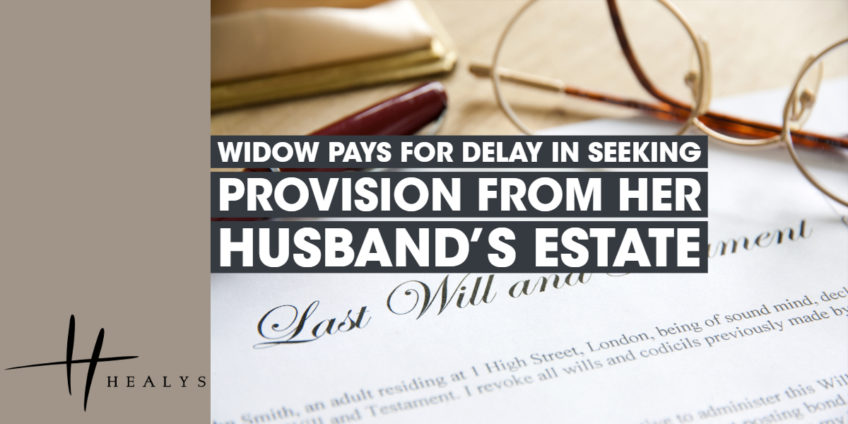 If you feel that you have suffered a wrong of any kind, a delay in taking legal action can put paid to your chances of obtaining justice. A widow who was left nothing in her deceased husband’s will found that out to her cost when her hopes of obtaining reasonable financial provision from his estate were dashed.

The couple had been married for 13 years but had separated about a year before the husband died. The wife had lodged a divorce petition, but those proceedings were interrupted by her husband’s death. About a year previously, he had made a new will leaving his entire estate to two of his three children.

The widow eventually launched proceedings under the Inheritance (Provision for Family and Dependants) Act 1975, seeking reasonable financial provision from his estate. However, a six-month time limit applies to such claims and, that deadline having been missed by about two months, she sought judicial permission to proceed with her case.

She argued that the delay was comparatively trivial and that, being impecunious, she had been reluctant to engage in litigation. It was also submitted that, had she succeeded in divorcing her husband prior to his death, she would probably have been awarded half of his property and assets.

However, in refusing to waive the deadline and dismissing the widow’s claim, the High Court found that she had failed to give an adequate explanation for the delay. She was aware of the time limit even before her husband’s death and knew that time would begin to run when his will was admitted to probate. His beneficiaries were in a precarious financial position and any delay in the administration of their father’s estate would cause them prejudice.

The Court noted that the widow’s claim, although arguable, was not unanswerable. She and her husband had signed a prenuptial agreement, by which they agreed that there would be no sharing of any property either of them had acquired before the marriage. The husband’s principal asset, his home, fell into that category.

If you would like advice on this or any other related matter, please contact us on 020 7822 4000 or email enquiries@healys.com