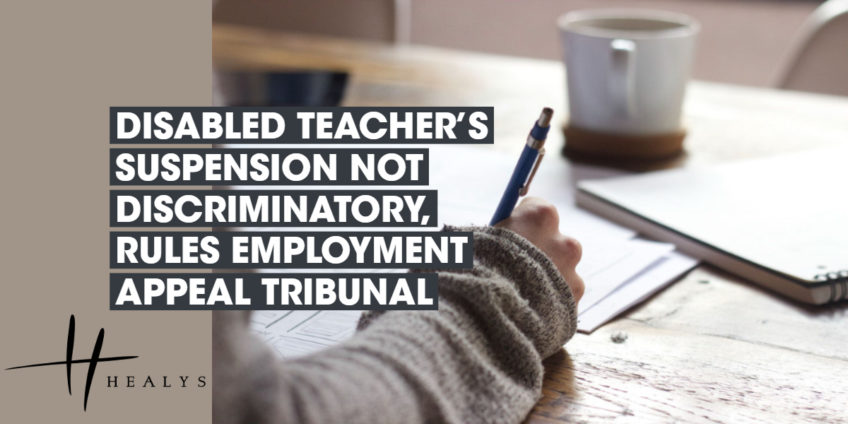 The question of whether the suspension of a teacher who could only write by hand for a few minutes constituted direct disability discrimination and harassment under the Equality Act 2010 was considered by the Employment Appeal Tribunal (EAT) recently in Ahmed v The Cardinal Hume Academies.

Mr Ahmed had qualified as a ‘Teach First’ teacher and was offered a placement at the Cardinal Hume Academies. He suffers from dyspraxia, which makes it difficult for him to write, and he is also unable to do so for more than a few minutes at a time without experiencing pain. A meeting was held to discuss the issue and its potential impact on Mr Ahmed’s ability to conduct his teaching role, during which the headteacher made remarks that Mr Ahmed felt amounted to harassment related to disability.

Subsequently, Mr Ahmed was suspended by the school and required to stay at home until the issues raised were considered further.

In response, he filed a formal grievance before resigning and bringing various claims against his former employer, including direct disability discrimination and harassment.

The Employment Tribunal (ET) dismissed his claims, finding that, in the circumstances, it was not reasonable for the headteacher’s questioning and manner at the meeting to be seen as constituting harassment. Nor did it consider it reasonable for the school’s suspension of Mr Ahmed, pending investigation, to be seen as amounting to harassment. As regards his claim of direct disability discrimination, the ET held that there were no facts to support a finding that the treatment he received was because of his disability per se.

Mr Ahmed appealed to the EAT. Firstly, he argued that the ET had not taken the correct approach to establishing whether there was harassment within the meaning of Section 26(4) of Act. It was his contention that this merely required an ET to take into account perception, circumstances and reasonableness when reaching its decision, whereas in this case the ET had ‘treated the question of whether it was reasonable for the impugned conduct to have the proscribed effect as determinative’. Secondly, in rejecting his claim of direct disability discrimination the ET had failed to give effect to its own finding that the reason for his suspension was his difficulty in writing.

The EAT dismissed his appeal against the ET’s findings. In its view, by applying the approach set out in a previous Court of Appeal case (Pemberton v Inwood) – that if it was not reasonable for the conduct complained of to be regarded as violating the claimant’s dignity or creating an adverse environment for them, it should not be found to have done so – the ET had not erred in its consideration of the harassment claim.

If you would like to discuss this or any other employment matter, please contact us on 020 7822 4000 or email employment@healys.com