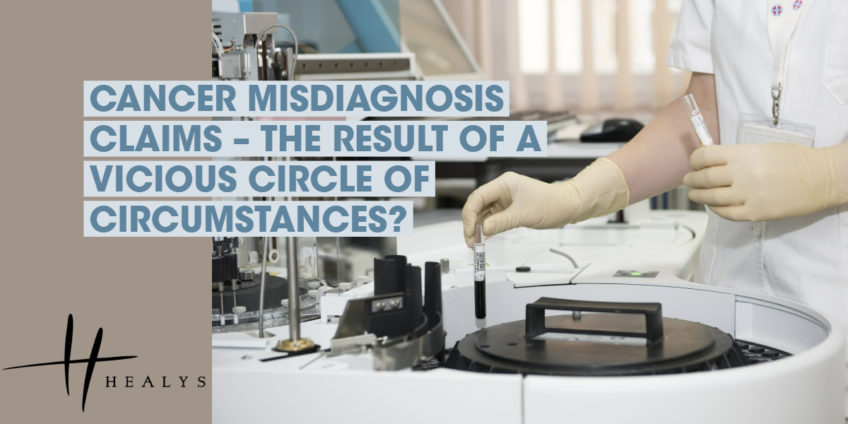 The phrase ‘cancer misdiagnosis claims’ has become used to describe claims not just for the misdiagnosis of cancer. It is also the term often used when people make medical negligence claims because the wrong cancer treatment has been applied, or as a result of a diagnosis of cancer being made later than it should have been i.e. because chances to spot the symptoms of cancer were previously missed by a medical professional on at least one occasion.

Chances to diagnose cancer at an early stage, are being missed too often

It was therefore disheartening to read an article in the Independent newspaper recently which carried the headline:

“More than 100,000 patients missed out on early cancer diagnosis because of NHS staff shortages, charity claims.”

The article reported on figures for 2017 released by Cancer Research UK which revealed that in that year, 115,000 people were diagnosed with late-stage cancer. This means that those affected had much less chance of beating the disease than they would have had if the diagnosis had been made at an earlier opportunity.

Ironically campaigns to raise awareness of the need to get a prompt diagnosis of cancer, to increase survival chances, may be inadvertently partially responsible for these latest poor figures. More people are being referred for an early diagnosis for possible cancer and this itself is creating a bottleneck, because the NHS does not have the volume of staff to carry out the task. Diagnostic staff are being overwhelmed by the number of patients that are waiting to be seen. The causes of this are quoted as being:

In October 2018, the then Prime Minister, Theresa May, pledged to increase the early detection rate of cancer from one-in-two people, to three-in-four, by 2028. That means increasing the numbers of cancers detected at an early stage by a further 100,000 people per year, than is the case now. The knock-on effect is that the numbers of radiologists, therapeutic radiographers and oncologists need to increase, in some cases by three-fold in number, to cope with the extra workload.

NHS chiefs say they need more funding to meet the demand. The government in response to the Independent’s article, repeated that:

“Cancer is a priority for this government – survival rates are at a record high in the NHS long term plan, we are committed to detecting three-quarters of all cancers at an early stage by 2028.”

A vicious circle that always seems to come back to the question of funding.

Is it wrong to make missed cancer compensation claims?

The other problem that arises whenever the NHS finds itself with increasing backlogs of work, is that mistakes happen. Having overworked individuals who can’t cope with their workloads and with a mass volume of work that is stacking up, inevitably leads to the kinds of problems considered in this article.

The victims of those mistakes sometimes resort to taking legal action against the NHS for clinical negligence. If a cancer sufferer has been diagnosed at an advanced stage, when, but for errors made by medical professionals, the diagnosis could and should have been made at an earlier stage, then that person might decide to make a late diagnosis of cancer claim.

However, it’s rare to find anyone who has been the victim of negligence by the NHS and has made a compensation claim for medical negligence, saying that they were wrong to claim, or that they needed to be persuaded by lawyers or anyone else, that it was their right to do so.

For the victims of missed or delayed cancer diagnosis, and their families, the consequences of medical negligence are severe and can often be tragically fatal. Who has the right to advise them, that they should not be claiming against the NHS for their pain, suffering and associated financial losses, such as loss of income?

The fact is that the NHS is desperately underfunded. It’s unlikely that anyone, irrespective of their political persuasion, would dispute that. How that underfunding is resolved is another question.

Healys’ medical negligence team has had considerable experience of helping the victims of missed, misdiagnosed or delayed cancer diagnosis to make a medical negligence claim. Contact us in complete confidence and without obligation at enquiries@healys.com