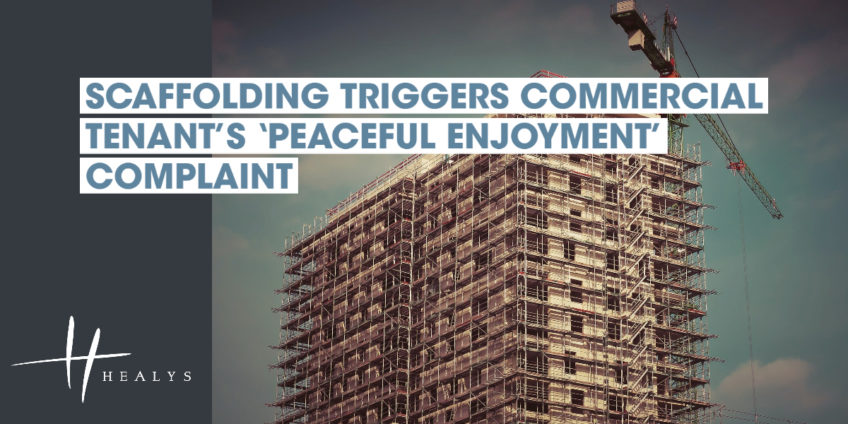 Almost every commercial lease includes a covenant which confers on the tenant a right to peacefully enjoy the premises. One such provision came under close High Court analysis in a recent case.

The case regarded a dentist whose 20-year lease on part of an office block contained a peaceful enjoyment covenant in fairly standard form. Recently, his landlord decided to convert the block into a 134-bedroom hotel. As a result, scaffolding and a hoarding were erected around his practice, remaining in place for almost two years.

The dentist launched proceedings against his landlord once the work had been completed. He was seeking over £450,000 in damages for alleged wrongful interference with his peaceful enjoyment of the premises. Additionally, he claimed that his practice’s profitability had gone down as the scaffolding went up. The site had also become an attraction for rough sleepers whilst it resembled a building site.

In ruling on his claim, a judge noted that the dentist’s rent had been waived whilst the works were ongoing. He found that the landlord had taken reasonable steps to minimise the disturbance. These involved the design of the scaffolding and the avoidance of noisy works at certain times of day. The dentist’s loss of profit claim was also rejected.

He was awarded £77,984 in compensation. The award received was mainly to cover the costs of repairing damage to his premises arising from the works. However, that was wiped out by an award of £79,279 to the landlord in respect of arrears of rent and service charges. Additionally, the dentist was ordered to pay 80 per cent of the legal costs of the proceedings.

Challenging that outcome, the dentist submitted that the waiver of his rent whilst the works were in progress was irrelevant to the question of whether the peaceful enjoyment covenant had been breached. However, in dismissing the appeal, the Court found that that argument, even if successful, would not lead to any increase in the dentist’s damages. Other grounds of appeal were also rejected on the basis that the judge’s factual findings were open to him on the evidence.