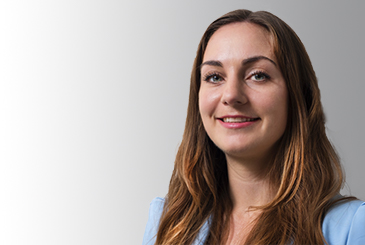 Christina deals with all aspects of private client work. Some of the areas that Christina deals with are will drafting, advising as regards to inheritance tax mitigation, estate planning, probate, estate administration, lasting powers of attorney and trust deeds. Having a background in working for a Local Authority, Christina also has valuable experience in dealing with financial assessments as regards to care fees and care fee mitigation.
.
Christina deals with Court of Protection matters including applying for Deputyship Orders, applications for Statutory Wills and appointment of additional trustees where the matter consists of jointly held property. Christina also has experience in dealing with aspects of contentious probate.

Christina is a bright young Solicitor looking to modernise the private client profession. She previously appeared on BBC Radio 4 Moneybox with their panel of experts advising on Inheritance Tax: http://www.bbc.co.uk/programmes/b074xvfl and recently became a member of the Society of Trusts and Estate Practitioners, having completed a diploma to attain the accreditation as a Trusts and Estates Practitioner; a highly prestigious and sought after qualification in the field of Private Client work.

Outside work, Christina enjoys travelling and training in martial arts (having received her black belt in Taekwon-do in 2014). She also enjoys morning exercise camps, skiing and playing the piano.

The importance of dealing with an estate in good time
Mrs O left her property to her son, Mr X. Mr X in turn left it to his wife, Mrs Y, but had failed to transfer the property into his name following the death of his mother. Mrs Y then died and, after some time, her beneficiaries decided to sell the property. However they were not able to do so as they did not have sufficient title to it (the property still being in the name of Mrs O).

Healys successfully obtained a “grant de bonis non” in Mr X’s estate, authorising Mrs Y’s beneficiaries to deal with Mr X’s unadministered estate and resealing the break in the chain of title to the property. Mrs Y’s house was then able to be sold and her children received their rightful inheritance.

Varying a Will after death
Mrs M died unexpectedly, without a Will, leaving an estate of £2,000,000. Her mother (Mrs Q), who is in her 80’s, inherits the entirety of the estate. Mrs Q also had assets of her own of £700,000 which meant her total estate was now totalling £2,700,000. This meant she now had a large inheritance tax problem on her hands, because on her death her estate would be subject to inheritance tax on anything over her tax-free allowance of £650,000.

Mrs Q instructed Healys to advise her. We completed a Deed of Variation to divert the inheritance from Mrs M’s estate, to the effect that it would not be divided between Mrs Q, Mrs Q’s children and her grandchildren. As the Variation was completed within 2 years of Mrs M’s death, HMRC viewed this as if Mrs Q had never inherited the £2,000,000 in the first place. With the addition of the new Residence Nil Rate Band which came into force in April this year, Mrs Q’s estate will no longer be liable to inheritance tax on her death. This saved the family £820,000 in inheritance tax.

Death bed Wills
Mrs D is rushed into hospital and finds she only has a few days to live. She has a husband who she is estranged from and wants to ensure her children inherit her estate and not her husband. We attended the hospital and took her instructions and completed her Will that day. Mrs D sadly dies the following day but thankfully, her estate does not pass to her estranged husband and instead her children inherit the estate.