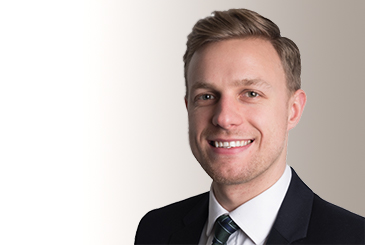 After joining Healys in December 2017, Joseph graduated with a Law degree in June 2018 and qualified as a solicitor in September 2021.

Joseph deals with all Commercial Property matters, but has shown a particular energy in the Secured Lending sector where he acts on behalf of numerous lending institutions in respect of commercial and residential mortgages.

Joseph brings a maturity to his work which belies the fact that he is newly qualified. Prior to qualifying, Joseph had already built up a following from brokers and lenders whilst still a trainee; and since he joined the practice, he has enjoyed praise from clients and lenders who appreciate his speed of delivery as well as his understanding and awareness of the commercial imperatives involved in their transactions.

I dealt with Mr Joseph Hall who acted for a bridging lender, providing a loan facility to my client. As a solicitor who deals with bridging lender's solicitors on a regular basis, Joe was a breath of fresh air. He was incredibly prompt, only asked reasonable questions (which is a rarity for bridging lender's solicitors) and nothing was "jumped" on us at the last minute, which again is often the case. As a matter of course, I would not leave reviews for my peers as the relationship is strictly professional, but Joe is an exception and someone I would happily deal with again on both a personal and professional basis. Healys - don't lose him!