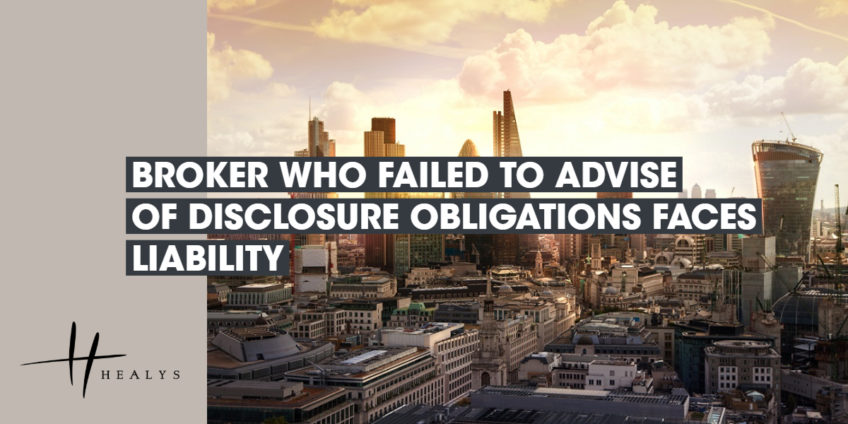 When a dispute broke out over an insurance claim, the value of line-by-line analysis of the policy terms and the obligations to make disclosures were made starkly evident. The dispute arose after the owner of a property rented it out to another firm for waste recycling. Insurance cover was placed with two insurers by a broker on behalf of the tenant and the property owner to cover various risks, including to the plant and machinery.

When one of the insurers declined to continue to accept the risks, the cover was placed with a third insurer, which visited the site and identified a breach of the policy terms. Five months later the recycling company ceased to trade and a new company run by the same management team took over its assets. The broker was asked to make sure the appropriate insurance policy was in place.

Three months after that a fire occurred, which led to claims by both the property owner and the tenant company. The third insurer declined to meet the claim, not only because of the breach of the policy terms but also because the insolvency of the company had not been disclosed. The remaining original insurer also declined to pay out, in this case because the company had not made it known that there had been earlier fires and had not disclosed notices and warnings it had received from the Health and Safety Executive.

The company sued the broker for negligence in arranging the insurance cover, claiming that the broker had knowledge of material facts which were undisclosed to the insurers and had failed to advise the company of its duty to disclose relevant information.

There were several different claims, but the court ruled that the broker had failed to advise the client of the necessity to report past incidents. However, for the company’s case to succeed it was necessary that the negligence had caused the loss of cover under the policy – merely impairing the cover was insufficient – and that must be decided on a line-by-line basis for each claim.

Whilst the insurers could deny liability for the loss, the failure of the broker to advise the company of its obligations put its own professional negligence insurers in the firing line.

If you have received negligent professional advice or service which has caused you to suffer a loss, contact us on 0207 822 4000 or email enquiries@healys.com