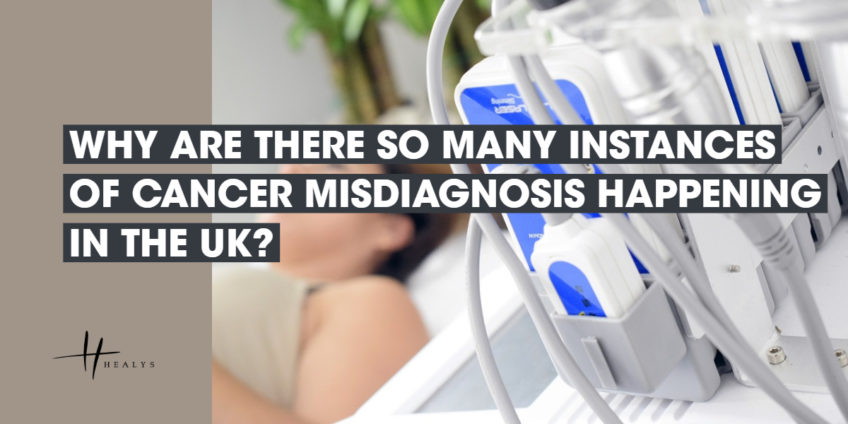 Statistics provided by Cancer Research UK indicate that on average 360,000 people are diagnosed with cancer every year in the UK. However, an article that appeared in the Independent newspaper in December 2018, revealed the startling finding that 4 out of every 10 people diagnosed with cancer have been misdiagnosed at least once before the disease was identified.

Possibly the only thing worse than receiving a diagnosis of cancer is to have cancer misdiagnosed or for the presence of cancer to be missed altogether during an examination by a health professional, only for the mistake to be found out at a later stage, when the disease has progressed. Equally, it has been known for a misdiagnosis to indicate that someone has cancer, when in fact it is something much less serious, causing untold stress to the person involved and even necessitating that they undergo unnecessary surgery or other treatment.

It is recognised that the best chance of surviving cancer, comes from having the earliest possible diagnosis, before the cancer has grown and spread too far. Delays in correctly diagnosing cancer can have devastating consequences. They can lead to the requirement for more intrusive treatment such as chemotherapy, radiotherapy and surgery. The worst-case scenario is that a misdiagnosis or delayed diagnosis can lead to the victim not surviving the disease or living for fewer years than they would have done if their cancer had been spotted at an earlier stage.

On a regular basis the newspapers carry reports about cases of cancer misdiagnosis. Julie O’Connor, herself a former nurse, died in February 2019, after mistakenly being told six times by doctors treating her, that she did not have cervical cancer. She was quoted as saying;

Why is cancer being misdiagnosed?

To try and gain an understanding of how early cancer signs can be misread by doctors it is worth looking at the most commonly misdiagnosed types of cancer;

Of course, notwithstanding the similarities between the symptoms of cancer and other less serious complaints, health professionals should still not be misreading symptoms. The National Institute for Health and Care Excellence (NICE) have produced guidelines that those in primary care (mainly GPs) should follow in cases of suspected cancer to assist them in deciding whether a patient should be referred on for further investigation, together with timelines within which this should be carried out.

The guidelines were published in 2015 (last updated in 2017). The fact that cancer misdiagnosis cases are still happening, suggests that the guidelines are, too often, not being fully followed through.

It is not always the case that doctors are misreading or misinterpreting the symptoms of cancer.

Mistakes are also being made in interpreting tests for cancer

In December 2017, it was reported that health watchdog, the Care Quality Commission (CQC) had found that the Queen Alexandra Hospital in Portsmouth had failed to spot cases of lung cancer. Three people were found to have “suffered significant harm”, two of whom subsequently died. It transpired that junior doctors had been asked to carry out inspections of chest X-rays without being suitably trained to do this. The X-rays should have been examined by radiologists or other appropriately trained clinicians. The CQC also found that there was a backlog of 23,000 chest X-rays which still awaited examination from the preceding 12 months. The Hospital management apologised to those affected.

An inquiry into the CQC’s findings reported in 2018 that the mistakes in the checking of the X-rays, were within ‘an accepted error rate of a qualified radiologist.’ The report went on to say that the junior doctors have caused ‘no increased levels of harm.’

The original findings of the CQC and the subsequent inquiry nevertheless throw up two significant points.

What do you need to prove when making a cancer misdiagnosis claim?

To make a successful cancer misdiagnosis compensation claim, you will first of all need to be able to prove that medical negligence has taken place. Negligence may have occurred because of a failure by medical professionals to;

If the results of tests or examinations have been misinterpreted or otherwise not properly acted upon, then medical negligence may have taken place in those circumstances, as well.

It is not though, sufficient, for the purposes of making a successful misdiagnosis of cancer claim or delay in diagnosis claim, merely to establish negligence on the part of a health professional. You will also need to demonstrate that a serious deterioration in your condition occurred due to the negligence of the expert. For example, this might mean that your prospects of making a recovery have been diminished by the doctor’s negligence. Alternatively, it might mean that the treatment that you have had to undergo has been more extensive than would have been required, had your condition been recognised sooner.

This is why, if you have been the victim of misdiagnosis of cancer, late diagnosis of cancer or of mistreatment of cancer, it is advisable to seek out assistance from a solicitor who specialises in this complicated area of law, should you decide to make a medical negligence compensation claim.

Within our team of expert medical negligence solicitors at Healys, we have solicitors with extensive experience of helping clients who have been the victims of cancer misdiagnosis. In addition to them possessing the exemplary legal skills that will ensure that you receive the maximum possible compensation for your cancer claim, you will also find them extremely empathetic to your needs. They will be totally mindful of the trauma that you have gone through and are likely still to be going through.

Our friendly and approachable cancer claim solicitors are always on hand to talk to you about any aspect of making a claim, so call us on 020 7822 4000 for our London office or 01273 838734 for our Brighton office. You can also contact us online.