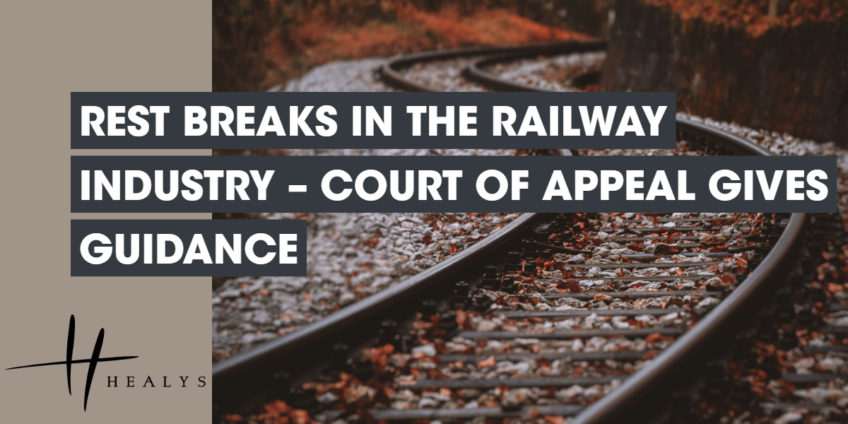 Under Regulation 12 of the Working Time Regulations 1998 (WTR), workers are entitled to an uninterrupted 20-minute rest break if their daily working time exceeds six hours. However, there are exceptions to this general rule to take account of unusual or particular working arrangements where strict compliance would cause operational difficulties, which include where the worker works in railway transport and their ‘activities are linked to transport timetables and to ensuring the continuity and regularity of traffic’.

Where an exception applies, the employer should nevertheless allow the worker to take an ‘equivalent period of compensatory rest’ wherever possible (Regulation 24(a)). In exceptional cases in which there are objective reasons for this not being possible, the employer must provide such protection as is appropriate in order to safeguard the worker’s health and safety (Regulation 24(b)).

In Network Rail Infrastructure Limited v Crawford, the Court of Appeal has ruled that a railway signalman’s rights were not breached by his employer’s failure to afford him a 20-minute uninterrupted break in every six hours he worked.

The signalman worked eight-hour shifts at various signal boxes, all but one of which were single manned. Train traffic was sporadic and, although he normally worked alone, he was able to take short breaks that together amounted to well over 20 minutes during each shift. He was not, however, guaranteed continuous 20-minute breaks and his employer, Network Rail Infrastructure Limited, required him to remain on call at all times and to take breaks as they naturally occurred in the course of his working day.

He claimed that his employer was in breach of the WTR for failing to provide either a 20-minute rest break or compensatory rest. Network Rail argued that the system in place was actually more beneficial from a health and safety point of view than one involving a continuous 20-minute break.

It was accepted that Regulation 12 of the WTR did not apply to him. An Employment Tribunal (ET) found that Network Rail had met its obligations as it ‘permitted (indeed encouraged) him to take compensatory rest breaks’. However, the ET’s decision was overturned by the Employment Appeal Tribunal, which was of the view that the length of the break is crucial and it is not open to employers to decide otherwise. The ET had observed that it would be possible to afford the signalman such continuous breaks by laying on appropriate personnel to relieve him and, in those circumstances, Network Rail had breached its obligations under Regulation 24.

In upholding Network Rail’s appeal, the Court of Appeal noted that the word ‘equivalent’ in Regulation 24 cannot have been intended to impose on railway employers an identical obligation to that which would have applied under Regulation 12. Instead the intention must have been that the rest periods afforded to railway workers should have the same value in terms of contributing to their general wellbeing.

There was no basis for the proposition that only an uninterrupted 20-minute break can provide a benefit to railway workers equivalent to that enjoyed by other workers. There was no reason to suppose that such a continuous break would always be better, say, than two uninterrupted breaks of 15 minutes. The ET had reached the common sense conclusion that the rest breaks afforded to the signalman passed the equivalence test. In those circumstances, his claim was dismissed.

This decision will come as a relief to employers of workers whose entitlement to rest breaks falls outside the general rule, as it will give them greater flexibility when organising rotas and means there is no obligation to employ cover to relieve lone workers so that they can take a full 20-minute break.