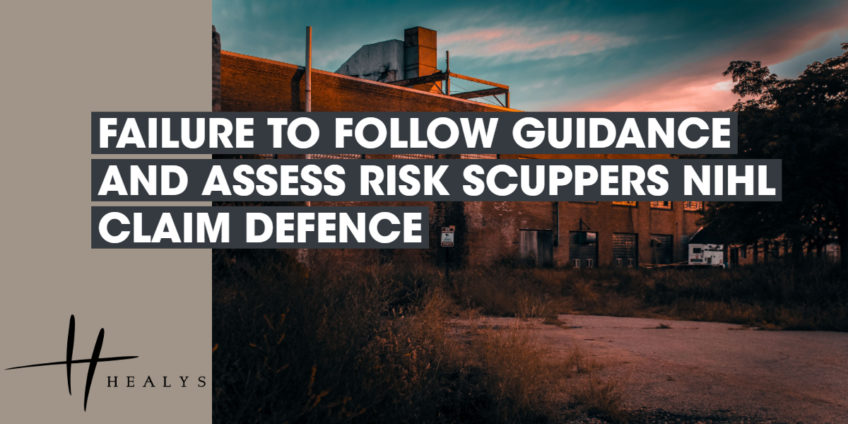 Noise-induced hearing loss (NIHL) is relatively common and often becomes evident only many years after the damage caused by exposure to loud noises has occurred. This means that the fate of such claims often depends on evidence about conditions that prevailed decades ago.

The importance of conducting risk assessments of workplace noise levels was again emphasised following a successful appeal by a man whose claim for damages for NIHL was initially refused.

One of the important factors in the success of the appeal was evidence that the defendant company had failed in its duty to carry out noise surveys at its factory premises after 1970, even though the risk to hearing posed by working in the vicinity of noisy machinery was well known by that time and employers have a general duty to keep their premises safe. The law on noise specifically was tightened up by the Noise at Work Regulations 1989, and subsequently by the Control of Noise at Work Regulations 2005.

The man worked in a strip mill and an extrusion mill for 13 years from 1963. Whilst the noise made by the machinery was so loud that workers had to shout to be heard, no hearing protection was ever provided.

Guidance in the early part of the man’s career had advised employers to ‘carry out a noise survey and…obtain specialist advice’, and listed six factors which indicated the existence of excessive noise. By 1968, this was altered to advise that excessive noise that exposed workers to the risk of damage to their hearing could exist if only one factor were present.

Employers now have a clear duty to comply with the standards for control of exposure to noise laid down by the 2005 Regulations and to assess and control the risks of environmental noise that cannot be eliminated. Such risk assessments should be carried out routinely and evidence of their completion and any remedial action taken retained long term. Employees who are likely to be exposed to noise must be provided with adequate hearing protection and given information and training on the attendant risks and how to minimise them.