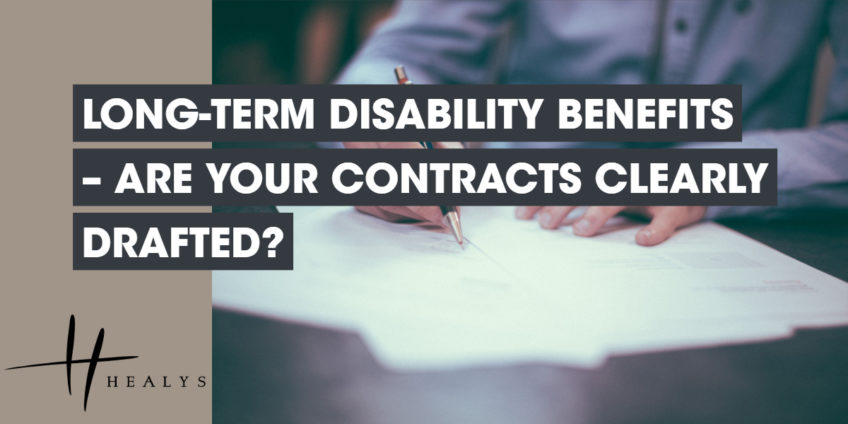 A recent case concerning the amount of long-term disability benefit payable to an employee who was found to have been unfairly dismissed (ICTS (UK) Limited v Visram) illustrates the importance of making sure the terms of any employee contractual benefits are unambiguous.

Mr Visram worked for ICTS (UK) Limited as an international security co-ordinator. His contract of employment entitled him to long-term disability benefit (LTDB) under a disability plan, the terms of which were set out in a members’ explanatory booklet. This provided that an employee in respect of whom the entitlement had been triggered was entitled to LTDB of two thirds of their salary until ‘the earlier date of your return to work, death or retirement’. It was payable as long as they remained an employee of ICTS (UK) Limited. The company had an insurance policy covering its liability to pay LTDB, which was referred to in the booklet.

Mr Visram was on sick leave from 19 April 2013 due to work-related stress and depression and became entitled to LTDB after 26 weeks’ absence. On 14 August 2014, he was dismissed on grounds of medical capability. His subsequent claims for unfair dismissal and disability discrimination were upheld by an Employment Tribunal (ET).

A dispute then arose as to when Mr Visram’s entitlement to LTDB ceased. It was common ground that he would never be able to return to a job such as the one he had before his sickness absence. The ET found that he was contractually entitled to such benefits until his return to his original job, death or retirement at age 68. In reaching its decision, the ET took account of the definition of a disabled member of the scheme as contained in the insurance policy as well as the wording of the explanatory booklet. ICTS (UK) Limited disputed this interpretation of the contractual documentation, arguing that ‘return to work’ meant that Mr Visram’s entitlement ceased when he was capable of returning to any full-time suitable work.

ICTS (UK) Limited appealed against the ET’s decision and lost. The Employment Appeal Tribunal (EAT) dismissed the company’s argument that it was impermissible for the ET to rely on the terms of the insurance policy to construe the wording contained in the booklet when reaching its decision. In the EAT’s view, the words ‘return to work’ clearly mean return to work for the same employer and to argue otherwise requires ‘linguistic sophistry’. However, in a case such as this, in which the exact meaning of the wording of the terms is open to challenge, there is no error in resorting to some other source for clarification. The ET did not, therefore, err in having recourse to the insurance policy to determine the issue.

It is advisable for employers to carry out a periodic review of employment contracts and staff handbooks to ensure their terms are clear and up to date.

For more information on the services we provide, please contact us on 0207 822 4000 or email employment@healys.com