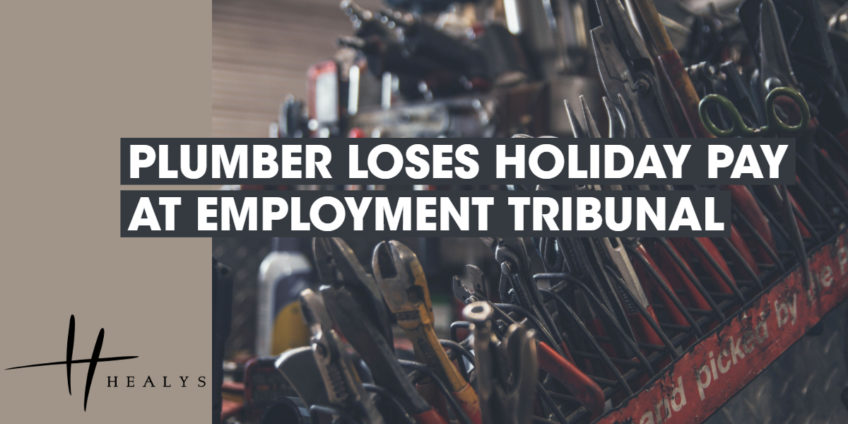 In June 2018, the Supreme Court ruled that the employment status of a plumbing and heating engineer, G Smith, who had worked for a reputable plumbing company between August 2005 and April 2011 was that of a worker, not a self-employed person in business on his own account, and he was thus entitled to paid holiday and the National Minimum Wage. However, Mr Smith has now lost his Employment Tribunal (ET) claim for £74,000 in backdated pay in accordance with his statutory annual leave entitlement.

In Bear Scotland Limited and Others v Fulton and Others, the Employment Appeal Tribunal confirmed that claims for arrears of holiday pay that are pursued under the unlawful deductions provisions are subject to the three-month limitation period for bringing claims laid down by the Employment Rights Act 1996 and a ‘series’ of deductions is broken if there is a gap of more than three months between non-payments. In the light of that case, the Government made changes to the law to limit the period of any unlawful deduction from wages claim to a maximum of two years.

The ET ruled that Mr Smith’s claims were out of time. However, as the judgment is not yet available, the precise reasoning behind the decision is, as yet, unclear.

Mr Smith has signalled that he intends to appeal against the ET’s decision. When he commenced his ET claim in 2011, he was unaware that he was entitled to paid holiday leave so did not have the knowledge necessary to attempt to assert his rights in that regard at that time or, indeed, in earlier leave years.

Clarification on the issue of historic holiday leave and pay in general is much needed. An earlier employment status case (King v The Sash Window Workshop Limited) was brought by a claimant who had worked as a salesman under a self-employed, commission-only contract. He too was found to be a worker, but his argument was that his employer’s failure to pay him holiday pay had prevented him from taking his full annual leave entitlement.

Regulation 13(9) of the Working Time Regulations 1998 (WTR) states that workers cannot carry forward leave – it has to be taken within the relevant holiday year, otherwise it is lost. At issue in this case was whether or not the claimant was entitled to pay in lieu of untaken leave throughout the whole period of his employment. His employer argued that he was not and any claim for payment in lieu of leave not taken in the years in question was time barred. He claimed that he did have the right to pursue his claim where the reason for not taking leave during that period was that his employer had refused to pay him.

The Court of Appeal referred questions regarding entitlement to paid holiday leave to the Court of Justice of the European Union (CJEU).

The CJEU ruled that Article 7 of the Working Time Directive (WTD), which the WTR implement into UK law, must be interpreted in such a way that in situations where a worker has not exercised their right to paid annual leave because their employer refused to remunerate them, the right to that leave carries over until the worker does have the opportunity of exercising it. When the employment comes to an end, the worker is entitled to payment in lieu of all leave that is still outstanding.

Furthermore, the CJEU found that an employer’s ignorance regarding a worker’s true employment status is no defence for not paying them holiday pay. Whether or not the employer believed that the claimant was not entitled to paid annual leave was ‘irrelevant’. It is for the employer ‘to seek all information regarding his obligations in that regard’.

However, the case was settled out of court, which left unanswered questions as to whether the WTR are fully compliant with the WTD.