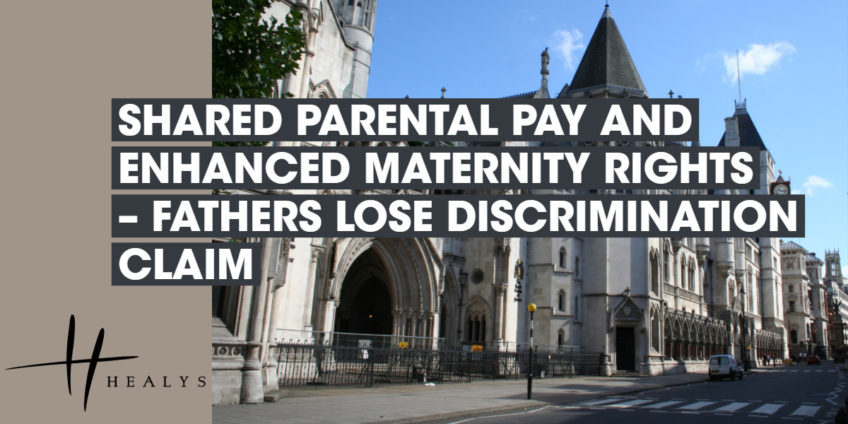 The Shared Parental Leave Regulations 2014 only require that employees taking Shared Parental Leave (SPL) are paid at the statutory rate, which is currently £148.68 per week, or 90 per cent of the employee’s average weekly earnings, whichever is lower. There is no statutory requirement for employers that offer enhanced maternity rights to women on maternity leave to ‘mirror’ those arrangements for employees who opt to take SPL. This has resulted in claims by fathers that the provisions are discriminatory. The Court of Appeal has now brought clarity to the situation when considering the appeals in two such cases.

The first case (Ali v Capita Customer Management Limited) concerned a father whose wife had been advised to return to work to help overcome post-natal depression. The father claimed that his employer’s policy of giving mothers with 26 weeks’ employment service the option of 14 weeks’ enhanced maternity pay followed by 25 weeks payable at the statutory rate, whereas fathers were only entitled to take two weeks’ paternity leave on full pay then SPL paid at the statutory rate, amounted to direct discrimination on the grounds of sex. The Employment Tribunal (ET) upheld his claim but this decision was overruled by the Employment Appeal Tribunal (EAT).

The Court rejected the father’s appeal. In order to succeed in his claim, it was necessary for him to establish that he had been treated less favourably than a comparable female employee on the basis of his sex. However, he faced a major hurdle in that Section 13(6)(b) of the Equality Act 2010 requires the Court to disregard any ‘special treatment afforded to a woman in connection with pregnancy or childbirth’ when comparing a father’s treatment with that of a hypothetical female co-worker.

The Court found that the father’s circumstances were in any event materially different from those of a mother on maternity leave. One of the primary purposes of maternity leave is to assist mothers in recovering from the physical and psychological impact of childbirth, and the father was wrong to argue that its only purpose, after the first two weeks of compulsory leave, is to help with childcare.

The proper comparator for the purposes of a direct discrimination claim is, therefore, not a woman on maternity leave but a woman on shared parental leave. On that analysis, there was no difference between his treatment and that of such a co-worker.

The second case (The Chief Constable of Leicestershire Police v Hextall) was brought by a police officer who worked for a force that, in addition to the statutory entitlements, offered mothers 18 weeks’ maternity leave on full pay but only statutory pay to parents who took SPL. His wife runs her own business and the officer took 14 weeks’ SPL during the period that she would have been in receipt of enhanced maternity pay. He claimed that the policy of only remunerating SPL at the statutory rate caused particular disadvantage to men and amounted to indirect discrimination. The ET dismissed his claim. The EAT found that the policy could be indirectly discriminatory but returned the case to the ET for further examination.

The Court found that the ET and the EAT had erred in classifying the officer’s claim as one of indirect discrimination. Rather, his argument was that his terms of work had been modified by the sex equality clause which is implied by the Equality Act into all terms of work. He was relying on that clause to claim that he had not received his contractual entitlement to pay as he suffered a reduction in his remuneration during the time he took off as SPL to care for his newborn baby.

The Court, however, found that that argument was bound to fail because of the exception in the Act that the implied sex equality clause has no effect in relation to terms of work which afford special treatment to women in connection with pregnancy or childbirth. In any event, a claim for indirect discrimination cannot be brought where the claim is, in reality, an equal terms claim, even if that claim only fails owing to the application of the statutory exception.

In dismissing both men’s appeals, the Court concluded that paying women on maternity leave enhanced benefits when fathers who take SPL following the birth of their child are paid at the statutory rate does not constitute unlawful discrimination, whether direct or indirect.