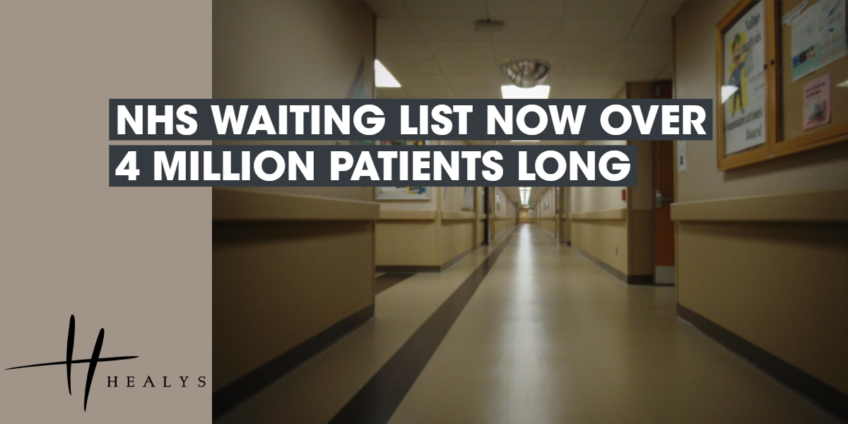 In 2018, official figures showed the waiting list for an NHS operation was over 4.3 million patients long.  To put this into context, if we were to print this off, assuming an average of 50 patients per page, and laid end to end, the list would be 23 kilometres long (or 14 miles) – enough to stretch from our office in Brighton to Worthing (via the A27).

In this article, we are going to look at the current state of NHS patient performance, the impact of the expanding waiting list on patient outcomes, and what the NHS are doing to make improvements.

How is the NHS performing?

Time from referral to treatment target

One of the key targets for the NHS requires that patients should be seen by a consultant within 18 weeks of referral.  The National Audit Office (NAO) figures show the actual performance on this measure has been quite variable; while back in 2012 – 13, 94% of referred patients were being seen on time, and in February 2016 this was 100%, in November 2018 this had reduced to 87.3%.

The elective surgery waiting list grew from 2.7 million in March 2013 to 4.2 million in November 2018.  This is despite the number of people being treated, increasing from 1.2m to 1.3m each month.

For those referred by their GP urgently for a suspected cancer, the NHS target is to commence treatment for 85% of these individuals within 62 days.  However, official figures show this has not been met since 2013, but in June 2018, the actual performance was quite close at 79.2%.  On the positive side, for the NHS’s four 31-day cancer targets, each of these were met in June 2018.

In all, these numbers show both positives and negatives.  While the NHS is performing against target in relation to a number of cancer measures, the ballooning of the elective waiting list (despite an increase in the volume of people being treated) and those waiting more than 18 weeks for treatment following referral raises considerable concerns for health providers and patients and their families.

The NAO acknowledges that longer waiting lists may result in further health deterioration and harm.  This makes perfect sense given the well-established link between early detection and treatment of cancer and survival rates.  Take, for example, pancreatic cancer, which has one of the lowest survival rates and typically kills very rapidly.  Pancreatic Cancer UK states that only one-third of stage one and two pancreatic cancer patients undergo surgery, which is the only potential cure for the disease.  And they believe that hundreds more early-stage patients could be eligible if avoidable delays in treatment are removed.  As such, they are campaigning to have treatment started for pancreatic cancer within 20 days of diagnosis by 2024.

What is being done to improve waiting lists and performance?

The NHS are carrying out a series of bold initiatives to bring down waiting lists and improve cancer treatment times.  They are creating ‘one-stop shops’ (called ‘Rapid diagnostic and assessment centres’) for cancer diagnosis, with the aim of enabling patients to receive a diagnosis within 2 weeks of referral.  Another focus area is on reducing the wastage of operating theatre staff time and resources.  NHS Improvement believes that by reducing late starts, making use of theatres if operations finish early, reducing delays between operations, and improving the admission process, hundreds of thousands more patients could receive the surgery they need each year.

The pressures facing the NHS are nothing new; for decades we have heard about our ageing population and what this will mean for the demand on precious healthcare resources.  The reality for many patients who are not being seen, diagnosed or treated within the time guidelines set is that they may suffer additional health complications, more invasive treatment, and ultimately live for a shorter time than they would have otherwise done.

If you are concerned that you or a loved one has already suffered serious consequences as a result of a delay in referral, assessment, or treatment, it is important to seek guidance from a clinical negligence solicitor who can advise you of your options.  Where appropriate, they will act promptly on your behalf to seek assistance with funding for rehabilitation and financial compensation for any expenses and losses suffered.  This can significantly relieve the pressure from individuals and families at a time when their focus needs to be on the well-being of themselves or their loved one.

If you think that you may have a claim for medical or dental negligence, contact Healys’ medical negligence team. We don’t charge for providing you with initial advice about making a claim. It is entirely obligation free advice too.  Contact us in complete confidence and without obligation at enquiries@healys.com.