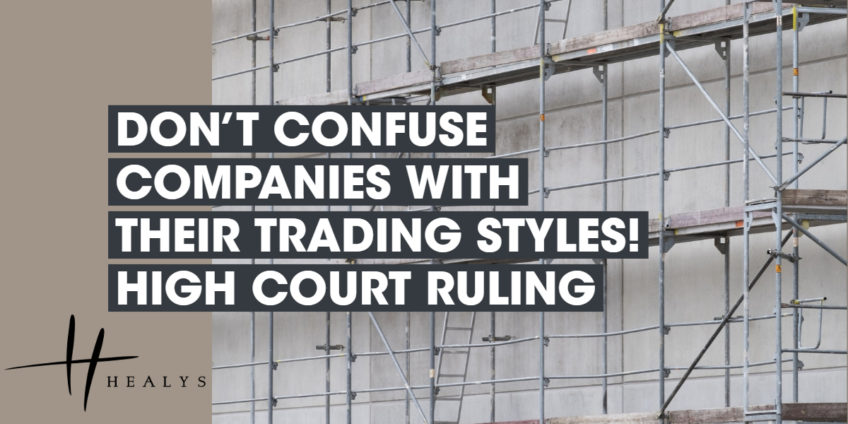 Companies are often far less well known than the brands under which they trade. A recent High Court case illustrated that failing to make a distinction between formal corporate entities and their trading styles can cause problems when it comes to dispute resolution.

The case concerned a scaffolding business that contracted to provide its services to a property company. Much of the pre-contract correspondence was conducted by the company under the heading of its trading style. However, the final purchase order was in the company’s name and the scaffolder was instructed to submit its invoices to the company.

After a dispute arose in respect of sums due under the contract, the matter was referred to an adjudicator by the scaffolder – who made the mistake of addressing the notice of adjudication not to the company but to its trading name. The company’s argument that that amounted to a fundamental flaw in the proceedings was rejected by the adjudicator, who awarded the scaffolder £57,473 plus VAT.

After the scaffolder launched proceedings to enforce that award , the company pointed out that its trading style has no legal substance and is shared by a multitude of other companies that trade from the same address. The notice having been misaddressed, it failed to identify the correct contracting party and the adjudicator thus had no jurisdiction to consider the matter.

In rejecting those arguments, however, the Court noted that a mis-description of a party in a notice of adjudication does not of itself render the notice invalid. The only confusion was on the scaffolder’s part and the company was at all times aware both that it was a party to the contract and that it was the intended respondent to the adjudication.

The notice named the specific property and project concerned in the contract and, taken in context, there was no room for doubt that, of all those to whom the trading name might have referred, it was the company against which the notice was targeted. There being no real ambiguity or lack of clarity in the notice, it was sufficient to effectively commence a valid adjudication. The Court entered summary judgment against the company in the full amount of the adjudicator’s award.

For advice on this or any other related topic, please call 020 7822 4000 or email enquiries@healys.com