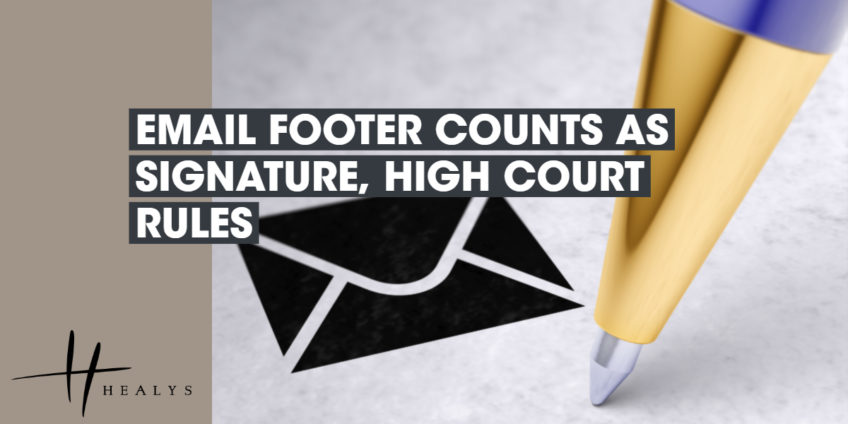 In a recent property case that will have a bearing on all contractual matters, the High Court ruled that a footer automatically appended to an email amounted to a legal signature and led to a contract for the sale of land being formed.

A couple who owned property beside Lake Windermere had been involved in a right of way dispute over a parcel of land that could only be accessed by crossing their property. The dispute was due to be heard by the First-tier Tribunal (FTT), but before the hearing could take place, settlement discussions led to the couple offering to buy the parcel of land for £175,000. The solicitor acting for the woman who owned the land telephoned the couple’s solicitor to say he had instructions to accept the offer, and later sent an email to confirm the terms of settlement. The email ended with the words ‘Many thanks’, followed by the footer, which contained his name and contact details.

The woman’s solicitor later contacted the FTT requesting that the dispute be relisted for hearing. The couple claimed that there was no basis for relisting as the matter had been settled. The woman’s position was that the terms of the settlement had not been finalised.

The couple sought an order for specific performance of what they claimed was a binding contract. The woman argued that no contract existed, in part because the email sent by her solicitor had not been signed as required under Section 2 of the Law of Property (Miscellaneous Provisions) Act 1989.

The Court found that the email footer constituted a signature. Although the footer was added automatically, a conscious decision would have been made at some point that it should be added to outgoing emails. The woman’s solicitor was aware that the footer would be added and the words ‘Many thanks’ indicated that there was an intention to connect the name with the email’s contents. An ordinary person would regard such a footer as a signature.

The Court granted the order for specific performance sought by the couple.

There are specific rules that apply to contracts involving the sale or disposal of land. We can advise you on buying or selling property, or assist you with any other property law matter. Contact us on 020 7822 4000 or email property@healys.com