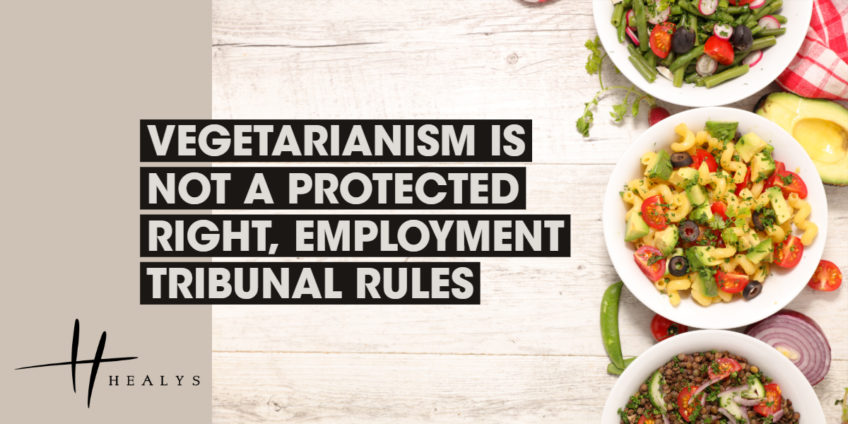 People have all sorts of reasons for choosing not to eat meat, and that prompted an Employment Tribunal (ET) to rule that vegetarianism is a lifestyle choice, rather than a philosophical belief protected under the Equality Act 2010.

The case concerned a waiter/barman who lodged a complaint of discrimination on grounds of religion or belief after losing his job (Conisbee v Crossley Farms Limited And Others).

The ET considered as a preliminary issue the question of whether a belief in vegetarianism is capable of being a protected characteristic within the meaning of the Act.

The ET noted that, in order to qualify as a philosophical belief meriting such protection, a belief must be genuinely held and not merely an expression of opinion or viewpoint. It must not conflict with the fundamental rights of others and must be worthy of respect in a democratic society. It must also relate to a weighty and substantial aspect of human life and behaviour and must attain a certain level of cogency, seriousness, cohesion and importance.

The ET acknowledged that vegetarianism is worthy of respect in a free society and that the man genuinely held an admirable belief that the world would be a better place if animals were not killed for food. However, it was not enough to have an opinion based on some real or perceived logic. Vegetarianism, the ET found, is not about human life or behaviour, but is a lifestyle choice concerning the lives of animals and fish.

Distinguishing vegetarianism from veganism, the ET noted that vegans generally have a clear and cogent belief that killing and eating animals harms the environment and is abhorrent in a civilised society. Vegetarians, on the other hand, have wide-ranging motives for eschewing meat, ranging from concern about the way farm animals are treated to personal taste. The man’s discrimination claim was dismissed.

For advice on any employment law matter, please contact us on 020 7822 4000 or email employment@healys.com.