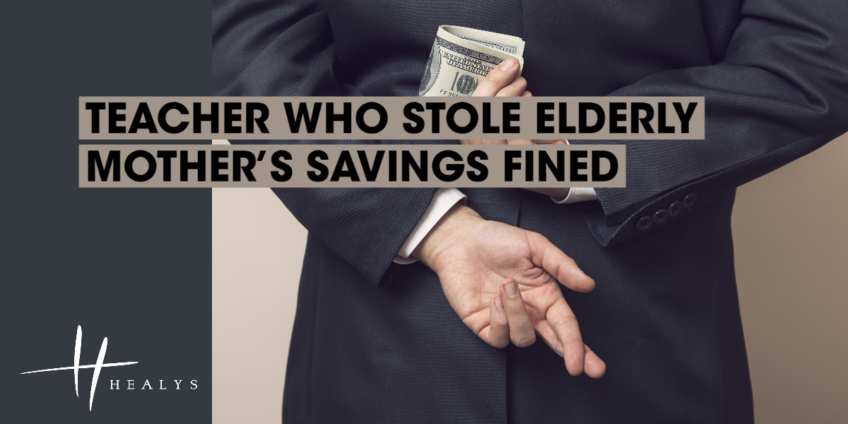 Elderly people may have little choice but to rely on their loved ones to manage their finances. However, that trust may be taken advantage of. In one case, a retired teacher was heavily fined for making unauthorised withdrawals from the joint building society account he held with his frail mother.

Just over a year before his mother’s death, the teacher, himself a pensioner, made three separate withdrawals from their joint account, totalling £1,383. Prior to the withdrawals, his mother had been diagnosed with moderate dementia. Medical experts were unanimous in their view that, prior to the withdrawals, she had lost the capacity to make decisions for herself and was incapable of handling her own financial affairs.

After a family dispute in respect of the mother’s estate developed, the teacher’s sister reported him to the police. He subsequently pleaded guilty to three offences of abusing his position of care, contrary to Section 1 of the Fraud Act 2006, and was fined £5,000 in respect of each count.

In dismissing his challenge to those convictions, the Court of Appeal in Northern Ireland noted that he had pleaded guilty unequivocally and that his evidence that he had not done so of his own free will was unconvincing. There was no merit in his criticisms of his representing lawyers prior to his guilty pleas and they emerged from the proceedings with their reputations unscathed.

The courts see a regular flow of similar cases where someone has taken advantage of a trusting elderly relative. Healys’ solicitors can assist you with managing your financial affairs if you become unable to do so yourself. To find out more, please contact Healys LLP on 0800 2800432 or email us at enquiries@healys.com.