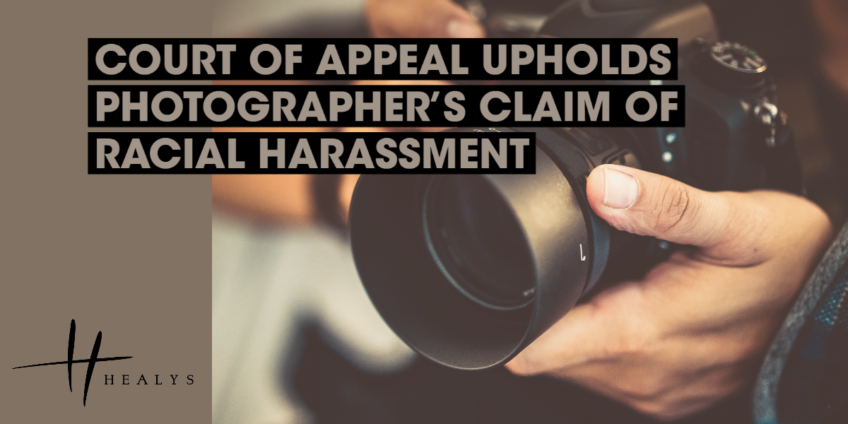 Race discrimination in the workplace is not always overt, or even conscious, but judges are on the alert to spot instances of stereotypical prejudice, as a Court of Appeal ruling strikingly showed.

The Court has dismissed an employer’s appeal against a ruling that a photographer who was unexpectedly fired in intimidating circumstances had been subjected to racial harassment and was therefore entitled to an award of damages.

The photographer had invested a lot of time and money into her career and reasonably believed her job to be long term. She was, however, reduced to tears after being called to the managing director’s office and, in the presence of another manager, dismissed on the spot without any prior warning. She was at first informed that she was being made redundant – which an Employment Tribunal (ET) subsequently found to be an obvious lie. Later on, she was accused, without foundation, of stealing stock.

She claimed that the ill-treatment had occurred because of her race. Both the ET and the Employment Appeal Tribunal found that race had been a factor in her employer’s decision to dismiss her.

The woman’s employer took its case to the Court of Appeal, arguing that the ET’s decision was legally flawed. It claimed that she had failed to prove a prima facie case that her dismissal was influenced by her race and argued that there was no evidential basis for such a finding. The fact that she was black and was dismissed was not enough to establish her case.

The Court noted that although the ET did not make any specific reference to the statutory burden of proof provisions, it was ‘adequately clear that it had them in mind’ and its conclusion was intended as a finding that a prima facie case had been made. The ET would have been well aware that some misguided people do, not always consciously, have prejudices against black people that predispose them to suspect misconduct. In the Court’s view, the manager’s persistence in lying about the true reason for the photographer’s dismissal formed the basis of the prima facie case of race discrimination. The burden of proof therefore shifted to the employer to show that race was not a factor in the decision to dismiss her and this it had failed to do. If the employer genuinely believed that she was guilty of theft, it may plausibly have been influenced in reaching that conclusion, so hastily and on so little evidence, by a stereotypical prejudice based on her race.

We can provide expert advice on issues relating to discrimination law issues. For more information, please contact Healys LLP on 0800 2800432 or email us at enquiries@healys.com.