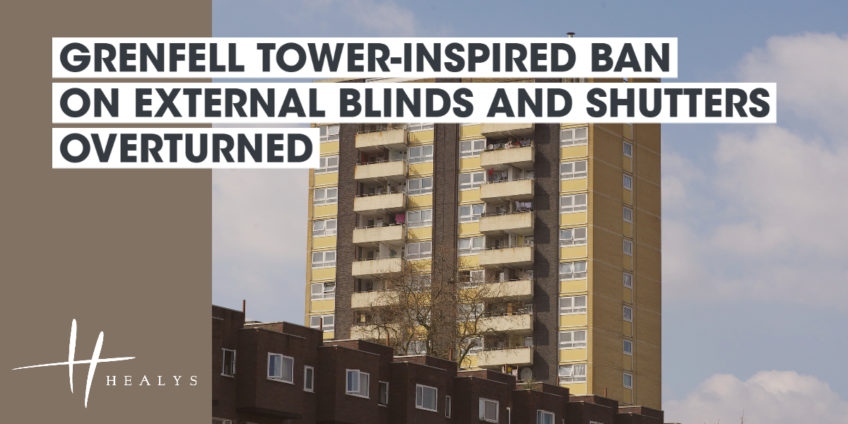 Changes in building regulations can have a dramatic impact on businesses. Due to this, the Government is under a duty to act fairly. The High Court made that point in the context of new rules introduced in response to the Grenfell Tower blaze.

Following the disaster, the use of flammable cladding products on high-rise buildings was outlawed by the Building (Amendment) Regulations 2018. Additionally, external shutters, awnings and blinds were banned on buildings over 18 metres in height unless materials used in their manufacture have met an exacting fire safety standard

A trade body representing the interests of blind and shutter manufacturers mounted a judicial review challenge to this ban. It put forward uncontested evidence that it is currently impossible to manufacture fabrics for various products – including awnings, canopies and roller blinds – to the required standard.

In ruling on the matter, the Court found that, on the basis of technical advice, the Secretary of State for Housing, Communities and Local Government was rationally entitled to bring products manufactured by the body’s members within the scope of the ban.

In upholding the challenge, however, the Court observed that, under Section 14 of the Building Act 1984, the Secretary of State was explicitly required to consult the body and other potentially affected trade associations before introducing the Regulations. Press releases issued by the Government had focused on combustible cladding primarily. Additionally, the consultation document did not make clear that products such as external shutters, blinds and awnings would be caught by the ban.

In ruling that the consultation process was so unfair as to be unlawful, the Court found that the ban had taken the body by surprise and that its members had been effectively deprived of an existing right to trade in certain products. The relevant part of the Regulations was declared invalid.