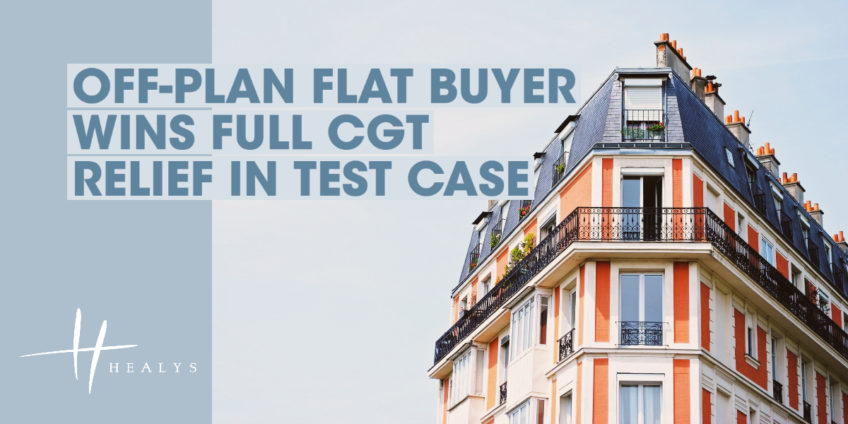 Does the buyer of a property ‘own’ it after contracts are exchanged but before the transaction is completed? The Court of Appeal’s answer to that fundamental question delivered a substantial Capital Gains Tax (CGT) saving to an off-plan flat buyer.

In 2006, the buyer entered into a contract to take a 125-year lease of a flat at a price of £575,000, paying a 10 per cent deposit. It was at that time no more than an empty space. The development was delayed by the credit crunch and it was not until 2010 that the purchase was completed and the buyer moved in.

The buyer occupied the flat for two years before selling it. In reliance on Sections 222 and 223 of the Taxation of Chargeable Gains Act 1992, he claimed that no CGT was payable on the transaction. This was because the flat was his main residence throughout his period of ownership.

In raising a demand for £61,383 in CGT against him, however, HM Revenue and Customs (HMRC) took the view that he became the flat’s owner on exchange of contracts in 2006. His CGT relief was accordingly reduced in proportion to the period thereafter when he was not occupying the property. The buyer successfully appealed against the demand to the First-tier Tribunal, but that ruling was subsequently reversed by the Upper Tribunal.

In upholding the buyer’s challenge to that outcome, the Court found that HMRC’s interpretation of the phrase ‘period of ownership’, as it appears in Section 223, would have perverse results. Lengthy gaps between exchange of contracts and completion of property transactions are by no means uncommon. Additionally, if HMRC’s arguments were correct, ordinary homeowners would rarely qualify for full CGT relief. Such a result would not accord with the intention of Parliament.

The Court ruled that a person who contracts to buy a property cannot be said to own it. They will generally have no right to possess, occupy or use it, let alone make it their only or main residence, prior to completion. The flat in question did not come into existence as a habitable property until shortly before the buyer moved in and his period of ownership thus did not commence until the date of completion. He was therefore entitled to full CGT relief on the sale of the property.

We can offer advice regarding property law and tax. For more information, please contact Healys LLP on 0800 2800432 or email us at enquiries@healys.com.