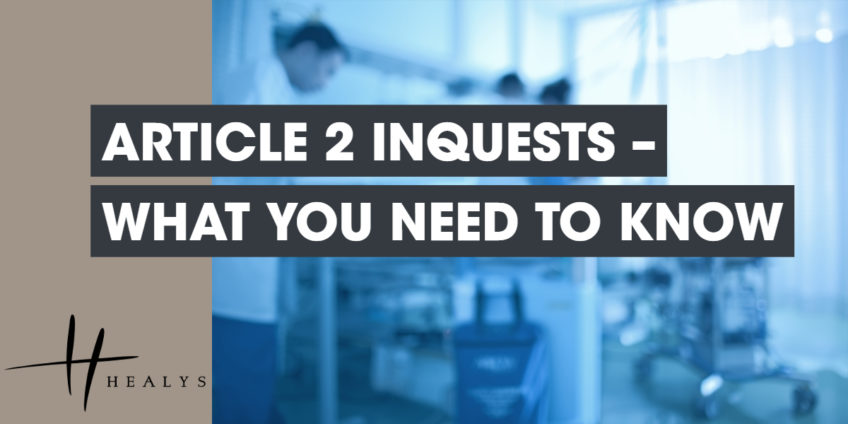 The death of a loved one is probably the most traumatic, harrowing experience any human being will experience in their lifetime. Not only is there a period of unimaginable grief, suffering and uncontrollable feelings of sadness and loss to go through, but in addition there are a wealth of practicalities that have to be dealt with – a funeral to be arranged, finances to be sorted out, fellow grieving relatives who need supporting and potentially, sales of property and effects to be dealt with.

On top of that, depending on the circumstances in which the deceased passed away, there may also be the need for the bereaved to attend a Coroner’s Inquest into the death of their loved one.

In our article, ‘What Happens at an Inquest?’, we attempted to answer a number of questions that we are often asked concerning the nature of an Inquest: when one is needed, what happens at the Inquest and what will be required of any family members should they be required to attend the Coroner’s court as a witness.

As that article answers many of the basic questions that might be raised by the deceased’s relatives about the Inquest procedure, it is sufficient to re-state here, that an Inquest will be called when death occurs in any of the following circumstances:

The purpose of the Inquest is to find answers as to:

This article focuses on the type of Inquest that is known as an ‘enhanced Inquest’. This form of Inquest is more formally known as an Article 2 Inquest.

Article 2 of the European Convention on Human Rights provides that:

The Article further provides that every person has a right:

This can be further described as meaning that member states have the following duties:

‘For the state to investigate a person’s death’

This duty is reflected in the implementation of the Article 2 Inquest process, which carries an enhanced duty to carry out a:

‘thorough, independent and effective investigation into a death.’

The Article 2 Inquest process will automatically be initiated in the case of a death in state custody.

If someone dies in police custody, in prison or for further example in an immigration centre, they will be considered to have died whilst in state custody and as such an enhanced Inquest under Article 2 will be required to investigate the death.

Death in an NHS Hospital

What about someone who dies in an NHS (state) hospital as a result of medical negligence?

Deaths as a result of medical negligence in a state hospital, do not automatically trigger the Article 2 process. Certainly the ‘negative duty’ to refrain from taking life, is not applicable in the case of a death resulting from medical negligence.

However, the ‘positive duty’ imposes the following obligations:

All Inquests whether they are Article 2 or non-Article 2 Inquests are required to be ‘effective’, investigations. This means that in all cases, the Coroner must give proper consideration to the circumstances of that death. All Inquests therefore need to be sufficiently thorough.

However, due to the particular circumstances of a death where it is deemed that an Article 2 Inquest is required, an enhanced level of scrutiny has to be applied.

Healys solicitors were involved in a case where they acted on behalf of the family of Mrs Joan Blaber, a vulnerable elderly patient, whose death occurred after she had been admitted to Royal Sussex County Hospital in 2017. Healys Medical Negligence claims partner, Jonathan Austen-Jones had conduct of the case.

Mrs Blaber suffered a minor stroke which led to her being admitted to the hospital. At the time of the incident that led to her death, she was making good progress in her recovery from the stroke. Indeed, she was due to be discharged within a matter of days, when she ingested floor cleaner which had somehow been put into a water jug that had been left on her bedside cabinet. The water was used to dilute some squash by a nurse. The diluted squash was then drunk by Mrs Blaber to assist her in swallowing her medication.

Joan died six days later of respiratory failure as a result of chemical pneumonitis, which had been caused by the ingestion of the floor cleaner.

An Article 2 Inquest was held before a Jury. After hearing all the evidence, the Jury returned a narrative conclusion, that:

After the Jury had delivered its conclusion the Senior Coroner for Brighton and Hove, Miss Veronica Hamilton-Deeley criticised the Trust for ‘serious failings.’

A significant piece of evidence that emerged during the Inquest, was that there had been a previous similar incident at the same hospital in 2016. The Coroner was highly critical of the fact that lessons had not been learned from that previous incident.

As a result, the Coroner stated that she would be writing to the Brighton and Sussex NHS Trust in the form of a Regulation 28 report, which was to set out the steps she believed should be taken to prevent any future similar deaths from occurring in this manner in the future.

The procedures involved both before, during and after Article 2 Inquests are of a complex nature. For a bereaved family, that is still trying to come to terms with the death of their loved one, having to become involved in this detailed legal process can be a truly daunting prospect. At Healys we have considerable and proven experience of representing families during these difficult times.

We understand this highly technical area of law and are able to:

Instructing one of Healys’ experts in the field of Inquest Law, will ensure that you are represented all the way through the process and give you one less thing to worry about.

Contact us at enquiries@healys.com for initial, confidential and without obligation advice