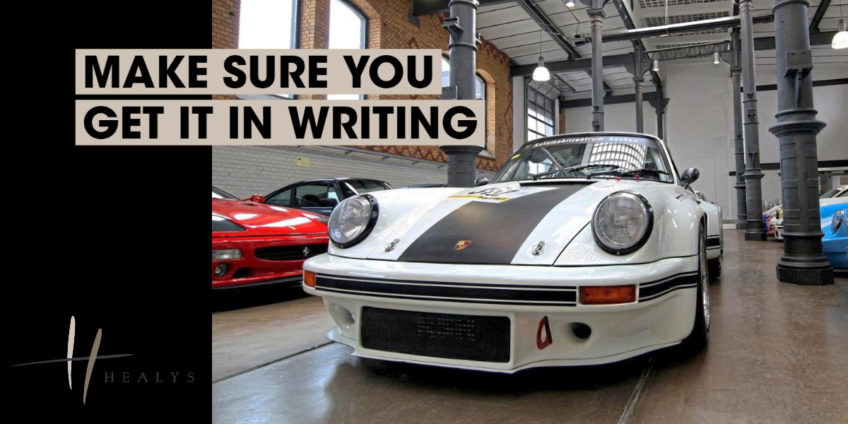 The wealth invested in the classic and collector car market has created growing demand for the services of the courts. Head of Healys Classic & Collector Cars practice, Clive Robertson, explains why.

Given man’s competitive streak, there have always been two kinds of car; those designed for transport, and those modified or built to race. Track racing, rallying and hillclimbing developed in the 1920s, but the essence of competition was ever present. For decades, race and competition cars carried no real value, especially if they weren’t capable of road use. Save for icons of historic significance, most went from being uncompetitive to the scrap heap.

In the 1990s, a new form of owner appeared, with the spare funds and leisure time to indulge themselves by acquiring sports cars they’d coveted in their youth. Road rallies for historics sprang up to cater for this new demand, which often carried a social side. Consequently, suitable eligible cars became more sought after and therefore more valuable.

Such activity tempted wealthy individuals onto the track, in the form of historic racing, so putting to use some of the valuable icons that had been in disrepair or languishing in museums. Today we have the Goodwood Revival and Mille Miglia.

This demand fuelled a huge rise in road and race car values, especially concerning low production runs or distinguished histories. Naturally, the rush to satisfy demand has attracted some individuals who’ve turned out to be less scrupulous about what constitutes provenance and true historic identity. Lines have become blurred, and buyers have often been their own worst enemies by failing to undertake due diligence pre-purchase.

Consequently, parties in dispute are ever more finding themselves driven to court to settle their differences. This year, two high-profile cases have been heard by the High Court in London, while the commercial court of Bologna has delivered an apparently landmark decision.

Seddon vs DVLA highlighted an anomaly in terms that there’s no definitive manner in which title to a car in the UK can be determined with certainty. Mr Seddon had bought an AC Cobra for £250,000, believing it to be a “UK-registered 1964 Historic vehicle” as recorded on the V5C in the name of the previous owner. The Driver and Vehicle Licensing Agency subsequently came by information that led to the reclassification of the car as having been built in 2002.

Mr Seddon then sold the car for £100,000, and issued proceedings against the DVLA for £150,000. In January, the High Court ruled in favour of the DVLA , stating: “The DVLA did not owe a duty of care to Seddon. It was performing its function under its statutory regime designed to raise vehicle excise duty.”

However, the court also said that: “Mr Seddon could have taken steps to protect himself by appointing an expert to investigate the car or by stipulating a warranty as to the car’s historic status.” So Seddon bought an AC that was not what it was held out to be, and therefore not worth what he paid. In effect, he was the author of his own misfortune, as he did not undertake due diligence.

In another high-profile case in February, it was reported that the administrators of the failed JD Classics were suing founder Derek Hood for £64m. This collapse was precipitated by a successful High Court claim brought by a Mr Tuke, who’d agreed that Mr Hood would invest in classics on behalf of Tuke. The sum invested was £40m. It was agreed that Hood would source cars in return for payment of 10 percent.

It transpired that Hood invented fake buyers and sellers, plus acted as a principal, buying cars in his name and then selling on to Tuke. The court heard that he’d bought an AC Aceca for £84,000, which he sold to Tuke three weeks later for £254,000. Tuke recovered £9m in damages.

Remarkably, despite the huge sums at stake, there was no contract between the parties, setting out their respective rights and obligations. At best, a written contract might well have avoided the need to resort to litigation; at worst, it might have resulted in a much shorter trial.

European courts are also now being increasingly called upon. As reported in Magneto 3, Ferrari claimed in the Bologna commercial court against a Modena maker of 250GTO copies. Ferrari asked the court to determine what amounted to “distinctiveness”, to officially recognise the car’s design and intellectual property rights. The court did, and also declared the model to be a work of art. The implications for the replica market could be huge.

Recent events in Germany will also ensure extra workload for courts. Police had searched 18 properties in North Rhine-Westphalia, Rhineland-Palatinate and Baden-Wurttemberg, investigating “gang-based fraud” relating to historic race cars. Losses were estimated at €100m. The investigation centred on Scuderia 66 and boss Uwe N, who was taken into custody, but other big names from the classic world are involved. The ‘old-timer gang’ is suspected of turning old chassis into race cars or replicas, which were sold on as originals. It is said that chassis numbers and documentation have been forged.

Given that southern Germany is the home of Porsche, one could assume that the products of the gang were, in the main, based on the 911, whose unitary body construction commenced in 1964 and continued in much the same form to the mid-’80s. Subject to the investigation’s outcome, as a cautionary process, owners of rare or ex-competition models from the era in question would be well advised to review the history and provenance of their cars.

If it transpires that individuals or firms involved in the investigation form part of the history of their cars, they ought to have those histories reviewed by the relevant experts. Similarly, it goes without saying that anyone seeking to enter the classic 911 market should seek the best advice available, so as to ascertain the provenance and hence the true value of any intended purchase.

Difficult challenges lie ahead in our collector car world. The best protection is a thorough inspection and a soundly drawn contract.

For more information on Classic Cars, please contact Head of Classic & Collector Cars, Clive Robertson directly on 07768 997 439 or email him at: clive.robertson@healys.com